The Union Budget presented by Modi government was aimed at boosting investment at a time when the economy is continuing to show signs of slowdown witnessed during the pre-elections phase. The month of July 2019 recorded 110 deals worth USD 9.8 billion which is 3x the deal values, but 10% short of deal volumes compared to June 2019. However, compared to July 2018, this year, July recorded a declining trend both in terms of values and volumes.

M&A transactions continued to witness a lackluster deal activity on the back of failing to record big ticket deals witnessed during July 2018. In addition, headwinds seen in the financial services space and slowdown in the core sectors have affected the M&A deal space. However, emphasis of the Budget on the liquidity concerns in the NBFC sector, and constant efforts of streamlining the IBC norm, among others, are likely to boost the M&A deal activity.

The tax and regulatory environment in India continues to be conducive for enhanced PE deal activity. In particular, the liberalised ECB framework widens the foreign source funding options for economically-distressed business units. This has further added to heightening the PE investments in India with the month recording the highest y-o-y values with investment worth USD 5.5 billion across 71 deals including the Brookfield-Reliance Jio Infratel deal worth USD 3.7 billion, marking the single-biggest private equity deal in India.

Sector focus: While telecom, start-up, energy and infra sectors attracted high value deals from both strategic and financial investors, IT, pharma and banking sectors remained active pushing the deal volumes during the month.

Outlook: Though the Union Budget has laid down a roadmap for growing the economy in a sustained manner with a focus on both urban and rural sectors, the impact on deal activity will depend on the measures and policies by the government to counter the slowdown, implement/ promote growth-focused investment plans and impact of global economic trends. 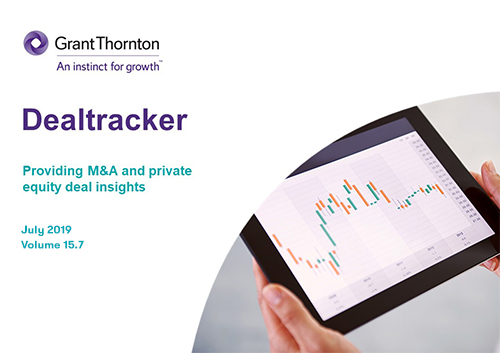