We are pleased to present the H1 2019 Dealtracker which captures recent deal activities in India. 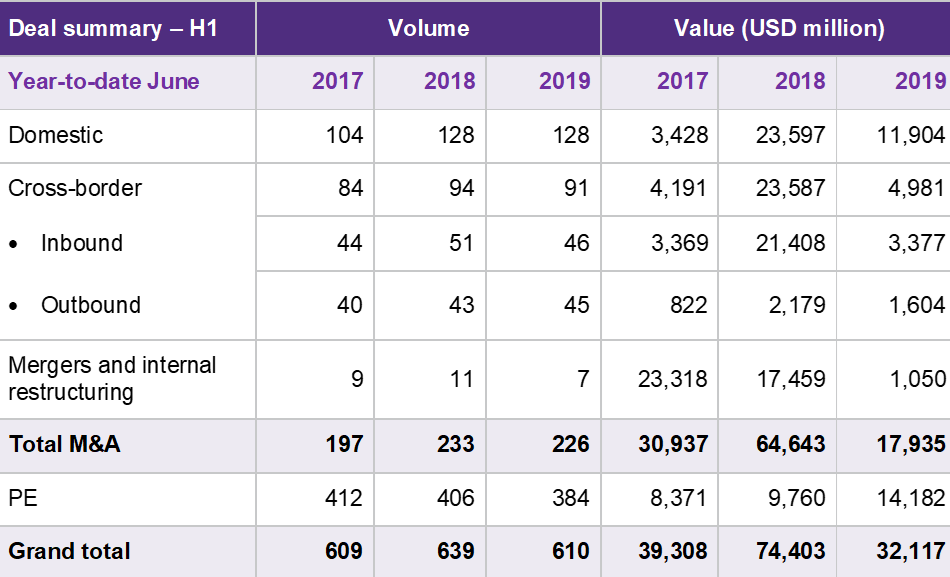 The year so far has been a mixed bag with many macro plus political issues, subdued inflation over US Fed’s rate hike update leading to uneasiness over the US and global economies, US-China trade wars, and spike in international crude oil prices amid uncertainties around the US sanctions on Iranian oil imports. On back of the prevailing uncertainties, the year so far recorded restrained deal activity: There were 600 deals worth USD 32 billion, with values falling to less than half of the levels seen in H1 2018. This was despite easing of Indo-Pakistan tensions, strengthening of Indian rupee against the US dollar and encouraging domestic sentiment due to easing inflation, giving rise to expectations of lower interest rates and record PE investment flows.

H1 2019 recorded the lowest overall M&A deal values compared to the last three years on account of absence of big ticket transactions. Domestic players transacted over 130 deals clocking about USD 13 billion, a 3x fall in the deal values compared to H1 2018, while cross-border deal values recorded around a 5x fall in values at USD 5 billion from over 90 transactions. Distressed assets deals have been a dominant theme in the M&A space. The IBC regulation and process is at an inflection point and supportive regulations and further efficiencies will make this a pacesetter for the coming years. Comparatively, there has been a resurgence of strategic domestic acquirers looking for opportunities in their core business to grow market share or expand geographical reach. There has been an increase in stock transaction driven M&A.

Sector focus: Sectors that performed during the year include manufacturing, energy, banking, IT, infra, pharma and start-ups. These sectors will perhaps continue to have substantial deal activity in the coming months with the Indian economy booming due to increasing urbanisation, rising middle class population, and a business-friendly government rolling encouraging reforms.

Outlook: Given rising global concerns around trade wars and slowdown in growth, India is emerging to be a preferred destination with many global investors. The outcome of the latest elections has given a boost to the country’s attractiveness. Deal makers will be focused on the intensity of new reforms to drive growth. On the flipside, earnings announcements, RBI’s stance on policy rates, the Union Budget, crude oil movement, and global growth would be the other factors affecting markets over the next few months along with the ongoing debate around global slowdown, monetary policy actions of global central banks and global trade tensions. We are confident of witnessing an accelerated and mature deal market with a surge in transactions and investments with the NDA government coming to power again. It is expected to streamline existing reforms and introduce new ones, enabling renewed deal activity and minimising uncertainty in the deal landscape. 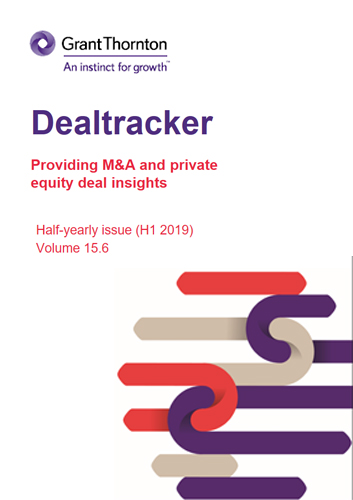