We are pleased to present Valuation Pulse for the first quarter of FY 2020.

On a sequential basis, Q1 FY 2020 was a setback quarter for most of the IT companies, demonstrating a muted or sluggish revenue growth and declined margins compared to Q4 FY 2019. This declining trend was due to a downturn in the key revenue verticals such as BFSI, retail and communications. It was further fuelled by rupee volatility, salary increments, lower H1 B visas and low utilisation rates. However, despite the downturn, the order book of IT companies has steadily increased, reflecting a temporary demand pushout. The strong order book is anticipated to drive the growth momentum in the upcoming quarters subject to timely implementation. The underperformance has led to further softening in the valuation multiples of IT companies, with mid and small cap companies witnessing a greater decline.

Engineering service companies witnessed a sharper underperformance and a continued decline in valuation multiples in Q1 FY 2020 due to client-specific issues and slower-than-expected recovery from the macro-economic headwinds faced by the aerospace and automotive verticals.

The deal activity in the IT sector also softened slightly in the last quarter with a marginal decline in transactions both by value and volume terms. Tech Mahindra again led the pack with the most number of acquisitions in this quarter, while mid cap companies led in value terms. The predictive analytics, SaaS and digital payments segments witnessed the most transaction activity in this quarter in volume terms. Further, Q1 FY 2020 saw some marquee transactions including L&T’s acquisition of Mindtree, one of the largest and the first ever hostile takeover in the Indian IT and ITeS industry till date, and Hexaware’s acquisition of Mobiquity. 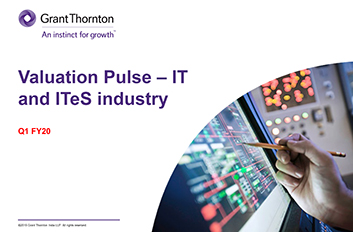