For the real estate sector, the last few years have been quite agonising. Declining sales and mounting debts played havoc for the sector that is seen as one of the growth drivers for the economy. However, things changed for the better in early 2014 as a stable government came to power at the Centre with a thumping majority. This led to a boost in investor confidence coupled with renewed interest from key stakeholders. The government has unleashed a lot of reforms in the last few months to give a fresh impetus to the sector.

First, the notification by the Securities and Exchange Board of India (SEBI) on the Real Estate Investment Trusts (REITs) regulations paved the way for introduction of an internationally acclaimed investment structure in India. The tax pass through status has been provided to the REITs through necessary amendments to the Indian tax regime. This is one of the key requirements for feasibility of REITs.

Secondly, the government’s vision of smart cities and affordable homes to all received a significant boost with the Presidential assent to The Right to Fair Compensation and Transparency in Land Acquisition, Rehabilitation and Resettlement Act, 2013. Though this Act was introduced by the erstwhile UPA-II government, the current government introduced significant changes in this Act by removing the consent clause to acquire land for five different types of projects. This was done through an ordinance, which has now received the Presidential assent.

The government also amended the rules for Foreign Direct Investment (FDI) in the construction sector by reducing minimum built-up area as well as the capital requirement, while also easing the exit norms. The market expects that these relaxations will go a long way in attracting more investments in the sector.

Lastly, the much-awaited Real Estate (Regulation & Development) Bill that was introduced in the Rajya Sabha last year, is still being debated at various levels. To iron out the differences between various stakeholders, the government recently introduced three revisions to the bill to ensure that it sees the light of the day soon. These recommendations have been made by the ministry and now await the clearance from the Prime Minister’s Office. While one cannot be certain that the Bill become a law in 2015 but the fact that the Bill is being debated and discussed at all levels shows the positive intent of the government.

There are some interesting trends that are also visible on the horizon. Private equity players are gearing up for REITs, picking up large chunks of unsold inventories, which is helping developers’ fast-pace construction activity. E-commerce companies, with some significant investments in 2014, are also gearing up to facilitate sales / rentals of real estate units.

On 28 February 2015, the Finance Minister presented this government’s first full year Budget. Clarity on the tax structure of REITs, commitment to “housing for all” and increased budgetary allocation towards the infrastructure sector were the key takeaways for the sector. The Budget is forward looking and pragmatic and holds the vision that goes beyond just this fiscal. The policy initiatives and tax proposals announced in the Budget mirror the intent of the government to set the economy on a high growth trajectory. It also aims to implement the proposals of the interim budget, which was followed by some key reform measures.

With several positive regulatory changes taking place to complement the Companies Act, 2013, the sector is poised for a fast growth in 2015. However, the real estate sector as a whole will have to focus on faster implementation of projects and on-time deliveries. Developers will have to also improve the quality of construction to cope with the growing expectations of customers and investors. Finality on the Real estate (Regulation & Development) Bill, a single window clearance system and the seeds for reforms sown in 2014 will surely bear fruit for the real estate sector in 2015. 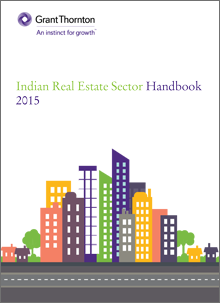