Taking a step back: Understanding fraud in the sector

The manufacturing sector is integral to India’s growth story, with its sub-sectors such as automotive, engineering and pharmaceutical driving employment and contributing to GDP. Unfortunately, the sector faces its own set of challenges, impacting growth. Traditionally, one of the pain points for manufacturers is managing margins, a challenge especially dominant for certain sub-sectors. The problem gets aggravated with incidents of fraud, which further eat into bottom lines, affecting the profitability and long-term growth of companies in the sector.

Inevitably, fraud risks not only hurt bottom lines but bring with them other serious implications - reputational and regulatory. The outcome is a vicious circle, which drains resources and hurts employee morale, consumer confidence, and shareholder and investor trust. The case to mitigate and prevent fraud in the sector is therefore clear - to prevent potential losses, fortify business and gain a competitive advantage.

What makes the manufacturing sector vulnerable?

Manufacturing is particularly susceptible to fraud due to high stocks of inventory (raw material, finished and work-in-progress goods), making it a sweet spot for inventory fraud schemes and non-cash theft.

Bribery and corruption from third-parties and traditional fraud schemes like cooking books of accounts/financial statements continue to proliferate. In recent times, while the sector is gearing up to draw the benefits of technology and automation, fraud risks from this source are on the rise. Some of the peculiar characteristics of the sector which make it susceptible to fraud are as follows: 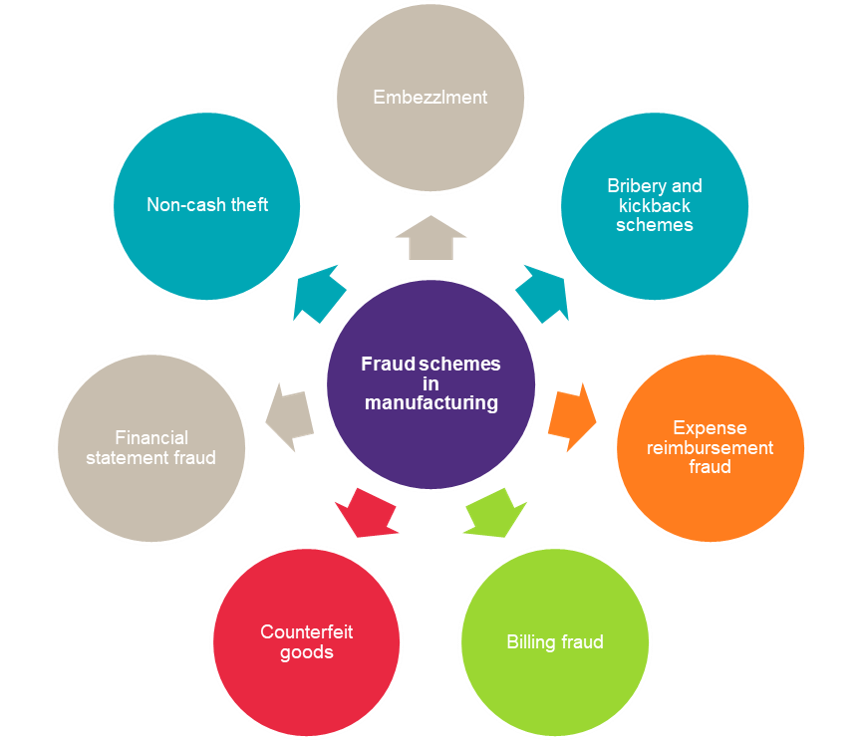 As per the Association of Certified Fraud Examiners (ACFE) 2018 Report to the Nations Global Study on Occupational Fraud and Abuse, occupational fraud in manufacturing resulted in a median loss of USD 240,000 in the 212 cases reported for the sector in the study. Further, manufacturing is one of the sectors where schemes of corruption pose a significant threat.

Some of the key potential red flags of fraud in the sector include:

Fighting fraud in the sector

The sector continues to be exposed to occupational fraud. This could significantly hinder growth and disrupt progress in the sector by discouraging potential new investment and hampering the opportunity for existing manufacturers and new entrants.

However, an ongoing fraud risk management effort, when established on a sound fraud risk assessment to identify existing and emerging risks, can mitigate the severity and frequency of fraud. It is important to diligently onboard and audit third-parties. While acts of fraud will continue, anti-fraud controls, when tailored to the sector and evolved over time, can significantly reduce or even eliminate threats of fraud.