Valuation Pulse – IT and ITeS industry

The IT and ITeS industry is one of the cornerstones of the Indian economy. However, it faced some challenges in 2016 and 2017 on account of a reduction in the demand of traditional IT services due to automation and digitisation, and uncertain political scenarios involving curbs on H1B visas in the US.

The IT companies were agile enough to amend their business models and started offering digital services, which accounted for 20%-30% of their revenues in the last quarter. They also witnessed good broad-based demand and a healthy deals pipeline in the recent quarters, including the most recent September 2018 quarter. Further, the depreciating rupee in CY18 has helped the IT companies mitigate some of negative impacts of the declining margin on account of increasing onsite costs due to visa curbs. This positive performance is reflected in the valuation multiples of most IT companies recovering back or even exceeding their long-term average multiples in the last few quarters.

The deal scenario also improved drastically in CY18. In a quest to acquire digital capabilities and to consolidate, the number of transactions increased significantly by both value and volume in CY18.

This periodic sector-focused quarterly publication aims to present the valuation and transaction pulse of the Indian IT and ITeS industry to the readers. 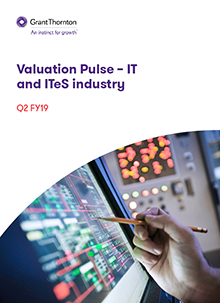