The year 2018 matched up to the record-breaking levels in 2017, signifying a trend rather than a one-time phenomenon in the Indian Private Equity/Venture Capital (PE/VC) history. Despite the upcoming elections, 2019 could surprise us with an active second half, and we expect 2020 to be the year recording the highest volumes of PE investments to end this decade.

The top trending themes during the previous year were revival of start-ups, continued uptick in control deals and larger bets, and increased focus of sovereign wealth funds towards Indian assets.

Launched by Grant Thornton in association with IVCA, the seventh edition of The Fourth Wheel captures the recent developments and trends in the PE deal landscape. 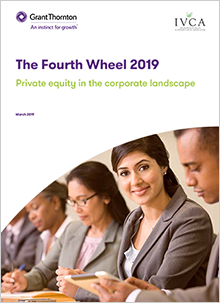