We are pleased to present the Quarterly Dealtracker which captures the recent deal activities in India.

The year 2019 has so far witnessed global economic uncertainty, trade and other constrains that uneased geopolitical relationships and heightened volatility in the equity markets, dampening the deal activity. Along with all these factors, there are India-specific indicators like the recent slowdown in the automobile sector, crisis in the financial services sector, sluggish consumer demand, struggling manufacturing sector, tight liquidity and deceleration of growth rate which indicate tougher times. The GDP growth rate of the Indian economy slipped to 5% in the quarter from April-June 20199, the lowest in over six years. Amid this scenario, the year so far recorded 917 deals with deal values being almost half of those recorded in YTD 2018 and the lowest in the last three years (YTD2019: USD 48 billion, YTD 2018: USD 93 billion).

Despite the government's efforts to revive sentiments, market performance remained muted due to global and domestic growth concerns. The July-September quarter recorded 308 deals valued at USD 15.6 billion, which saw a 12% and 15% drop in the deal volumes and values respectively as compared to Q3 2018. However, as compared to Q2 2019, the quarter recorded a healthy 27% increase in deal values, with a marginal 2% increase in deal volumes.

There was a steep decline in the M&A deal activity in Q3 2019 with total values dropping by more than half compared to Q3 2018, largely driven by a 71% fall in cross-border deal values. Regardless of this drop, it is encouraging to witness a steady pipeline of deals pushed by acquisitions of distressed assets, acquisitions to accelerate topline growth through new and attractive market segments and new capabilities, and divestment of non-core assets or businesses, particularly in capital-intensive industries. Similar to deal values, volumes also witnessed a 28% fall on the back of a 37% fall in domestic deal volumes. In addition to this, Indian companies remained inactive executing outbound transactions in Q3 2019 because of domestic and global uncertainties.

Contrary to the M&A deal activity, PE investments recorded an all-time high of USD 9.4 billion in the third quarter, surpassing the previous record of USD 7.9 billion in Q1 2019. Large investments added real momentum to the Indian private equity investment activity with 21 high-value investments of at and over USD 100 million each contributing to 79% of the total PE investment values. With the increasing confidence amongst investors, the reduction in corporate tax rate is also expected to give a boost to companies in India and those that want to invest in India, making it more attractive for both overseas and domestic investors. This, in turn, will boost economic growth in the country.

Sector focus: Deal volumes across start-up, IT and ITeS, retail and consumer, pharma and BSFI sectors represented 75% of the deals by volume. Q3 witnessed the single-biggest private equity deal ever in India with Brookfield’s USD 3.7 billion investment in Reliance Industries Ltd’s telecom tower assets. With this, the telecom sector topped the value chart for the quarter followed by high-value deals in the retail, infra, energy and banking sectors, together capturing 66% of the total deal values. Cross-sector deals are on the rise with significant opportunities to build scale through adoption of robotics, artificial intelligence and other technology solutions. The government has been working on a roadmap to not just clean the banking system but also make it robust. Rising investment in technology and infrastructure will realise efficiency gains. Additionally, adoption of technology and continuous innovations across sectors is likely to boost deal activity.

Outlook: In light of the economic slowdown and depressed capital markets, Finance Minister (FM) Nirmala Sitharaman announced a slew of measures, including a rollback of the surcharge on foreign and domestic portfolio investors to increase consumer demand and investments, enhancing the liquidity of banks to shore up purchases by consumers, easing Goods and Services Tax (GST) refunds to micro, small and medium enterprises, easing conditions for a struggling automotive sector, and exempting start-ups and their investors from angel tax. These measures are expected to boost the deal sentiment. 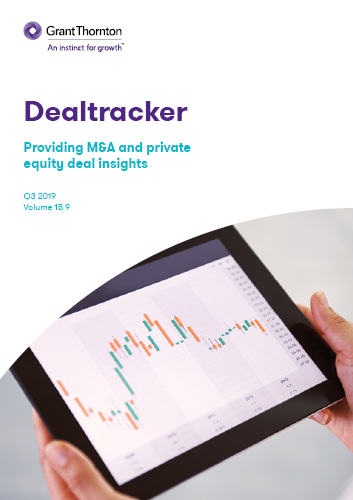