M&A activity in October 2019 witnessed 45% and 40% drop in deal values and volumes respectively as compared to October 2018 primarily due to low activity in the domestic deal trends. October 2018 had reported four large domestic transactions aggregating to about USD 2.1 billion; one in the energy and natural resources sector, two in the media and entertainment sector and one in the FMCG segment. While the trend in energy and natural resources sector continued in October 2019, the domestic transaction was replaced by an inbound strategic investment in Adani Gas Limited by French major Total SA to take India’s clean energy drive forward. Deal volumes was fairly spread across pharma, automotive, banking and financial services, energy and natural resources, IT and ITeS, and media and entertainment sectors.

Sector focus: Manufacturing, energy and natural resources, pharma, healthcare and biotech, IT and ITeS, and banking and financial services sectors are expected to contribute to M&A transactions, while debt-heavy and capital-starved sectors such as energy and natural resources, infrastructure management, and banking and financial services will be the major seekers for PE/VC investments. Start-up occupies a special status for strategic reasons both for M&A and PE/VC transactions and will continue to be the most sought after sectors. 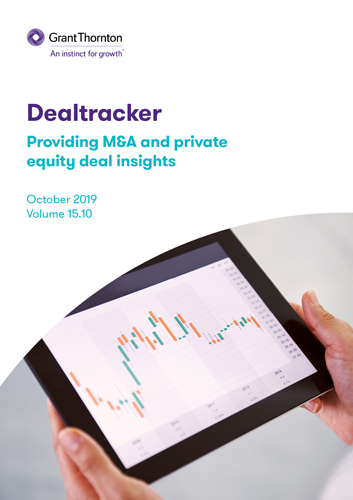