Against a difficult backdrop that included intensified US-China trade and technology tensions as well as prolonged uncertainty on Brexit and currency war, the month recorded 92 deals worth USD 3 billion, lowest monthly deal values recorded in the last 6 months. The month saw only two deals valued over USD 500 million and eight deals valued at and over USD 100 million each. Though the overall deal values remained flat as compared to August 2018, deal activity as compared to July 2019 witnessed a steep decline.

M&A transactions continued to witness a weakening deal activity with only 23 deals worth USD 845 million recorded in August 2019, marking the second lowest monthly deal volume till date (the lowest being 22 deals recorded in December 2017). Owing to global trade tensions and failure to record big ticket deals witnessed during August 2018, cross-border values fell by over five times. However, on the positive side, the domestic M&A values recorded a 55% increase over August 2018 on the back of encouraging measures and easing reforms. Domestic transactions were primarily themed around acquisition of stressed assets to strengthen market leadership position, divestment consequent to global transaction and compliance with competition commission requirements in India and investments in technology products to improve market offerings and efficiency.

The regulatory and policy framework in India continues to be favourable for heightened PE deal activity with values recorded at USD 2.1 billon, 1.6x times the August 2018 deal values, driven by seven high-value investments of over USD 100 million each. This displays a strong desire among PE players to invest in India. The month also exhibited an amplified interest from sovereign wealth funds in Indian assets with GIC’s USD 622 million investment in IRB Infra marking the sixth investment by the sovereign wealth fund in India in 2019.

Sector focus: While core sectors like infra, energy, manufacturing and real estate garnered top value deals during the month for the very rationale of consolidating operating capacities, paring debt, deleveraging assets and establishing strong presence, tech segments like start-ups, IT and e-commerce dominated the deal space with 72 deals pushing the deal volumes during the month.

Outlook: While policy actions and missteps have played an important role in shaping the global economic events and their impact on market sentiment, business confidence and creating headwinds for investments, active policy stimulus will be the need of the hour to support deal activity in the face of adverse macro-economic indicators. 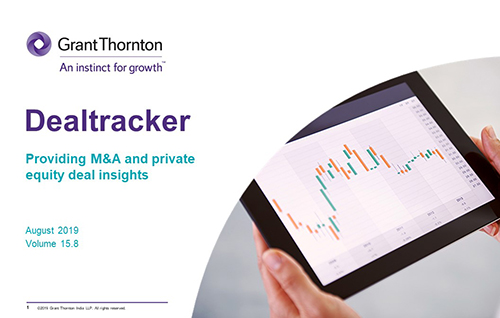