Executing smart city projects in India poses a unique challenge - the challenge of blending modernity without disturbing the local culture and habits. If anything, the project should not only adopt local ethos but also showcase it.

From a list of 100 cities in India being revamped under the Smart Cities Mission of the Indian government, some of the works under the Namchi Smart City project in Sikkim turned out to be quite unique. This project is being executed by Grant Thornton.

Any project under the Smart Cities Mission is classified under the Area Based Development (ABD) scheme. In Namchi, 13 broad areas ranging from mobility to sewage treatment, city branding, and those related to schemes promoting heritage and culture have been identified under ABD.

One of the projects identified under these was to modernise a Buddhist crematorium in the Aahley Gumpa area. With a 30% Buddhist population in the city, this was a priority project that needed intervention.

However, it had a few shortcomings. Structural inadequacies, scarce water supply and lack of parking space posed a major issue. Despite having a capacity to accommodate 1,000 people, the existing infrastructure in terms of toilets, and kitchen and dining area was inadequate.

After Grant Thornton won the bid to revamp Aahley Gumpa, our team comprising of Manas Sarma, led by Ravinder Reddy and Vishnu Varre, came up with a unique plan for redesigning the structure in about six months. Based on consultations, the core philosophy of the redesign was that it should be a peaceful place of commemoration, respite and remembrance for mourners and simultaneously allow the lamas to perform the rituals with full concentration. 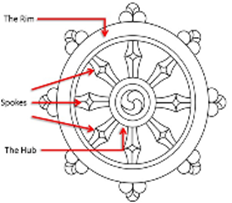 The design that Grant Thornton’s team proposed was inspired from one of the main ethos of Buddhism - the wheel of dharma. The wheel of dharma or the dharma chakra is one of the oldest symbols of Buddhism. Just like a cross represents Christianity, this symbol represents Buddhism all around the world. A traditional dharma wheel is a chariot wheel with varying numbers of spokes. Usually, eight spokes are the most common.

The schematic diagram shown below gives the evolution of the crematorium’s design inspired from the wheel of dharma.

The design of the new crematorium space will consist of the following elements: 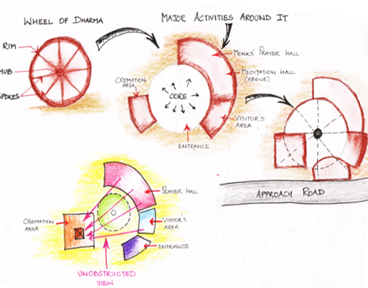 The new proposed design (as shown below) was accepted and the foundation stone for the new structure was laid in January this year.

The revamped structure is now expected to be ready and functional by next year. This unique project attempts to fulfil the demands of the Buddhist lamas of Aahley Gumpa, and is expected to be one of the most unique smart city projects done in the country - one where local values and tradition are blended with the modernity.

Birds-eye view of the ceremonial space and cremation furnace