We are pleased to present the Quarterly Dealtracker which captures recent deal activities in India.

The year 2018 ended with signs of global economic uncertainty, trade and other constrains that uneased geopolitical relationships, heightened volatility in the equity markets and uncertainty around Brexit. Along with all of the aforesaid, the Indian economy was also catching up with the general elections fever and consequently, as anticipated, the 2019 deal landscape commenced with a low pitch. The first three months of the year recorded around 290 deals valued at $21 billion, which is 10% and 8% lower in volume and value respectively as compared to Q1 2018. However, despite a slow start to the year, Q1 2019 recorded 33 deals valued and estimated at and above $100 million each aggregating to $18.2 billion, which is an encouraging trend.

Though we entered into 2019 with substantially less momentum with 110 M&A deals worth $12.5 billion compared to 118 deals worth $18.7 billion in Q1 2018, some big deals announced this year, including Arcelor Mittal’s acquisition of Essar Steel for $7.2 billion, Radiant Life care’s merger with Max healthcare for $1 billion has provided some encouragement, that the outlook for M&A will be healthy despite a drop. Strengthening market position through consolidation and geographical expansion along with monetisation of non-core assets to strengthen the core business were key drivers for the transaction during the quarter. We also expect to see an uptick in the M&A deal activity across domestic, inbound and outbound segments spurred by action from the financial services sector to minimise NPAs, and the US-China trade war being favourable in boosting India’s manufacturing exports.

The PE/VC deal values during Q1 2019 doubled as compared to Q1 2018 despite a 12% decline in volumes. A peculiar trend during the quarter was that there were 11 transactions in which the PE/VC bought stake greater than 50% aggregating to about 39% of the PE/VC deal values reported, which indicates a growing interest towards acquiring controlling stake and increasing trend of InvIT transactions. Key transactions with controlling stake included Brookfield Asset Management’s 100% acquisition of East West Gas Pipeline from Reliance Industries in their InvIT portfolio, 100% acquisition of Hotel Leelaventure Limited by Brrokfield Asset Management and 100% acquisition of the toll road asset (DA Toll Road Private Limited) owned by Reliance Infrastructure Limited by ISQ Global Infrastructure Fund II. 50% by of the PE/VC transactions in volume terms were consortium transactions, ie, multiple PE/VCs participating in single transaction aggregating to about $2.25 billion of transaction value. The need for funding for small and medium businesses to fuel growth and availability of transaction structures to monetise capital intensive businesses indicates the opportunity for higher tractions in the PE/VC landscape.

Continued reforms in the Goods and Services Tax (GST) and the Insolvency and Bankruptcy Code (IBC), major reforms related to foreign direct investment in sectors such as branding and defense, restructuring cross-border mergers, and amendments to delisting regulations 2009 will act as accelerators to the deal momentum. Further, PE firms looking for places to park their capital in leverage buyouts will help keep up the deal-making pace. In recent times, various domestic private equity funds and their investors, or Limited Partners (LPs) are also entering into collaboration in the form of co-investment, which presents a favourable scenario for both sides. While strategic investors seem to have the edge currently, PE funds are also actively exploring various structures to fund distressed M&A (for example: platform deals, ARC and AIF set up etc.). In addition to the investments, we expect fund/consortium formation and securitisation transactions to dominate activity in the distressed M&A sphere. While all of these present a favourable deal environment, much of the action is dependent on the policies of the incoming government, consequent to the general elections. 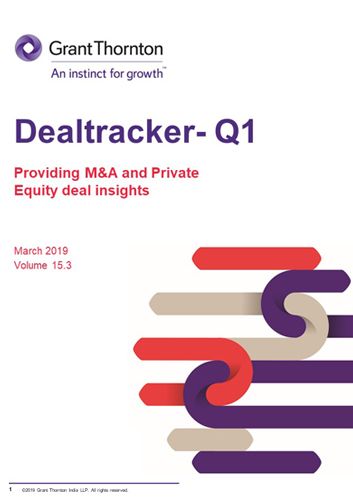