The much-awaited election results saw the Narendra Modi-led NDA government come to power for the second consecutive term. While the nation was polling and awaiting the election results, the month witnessed 33 M&A transactions and 48 PE transactions aggregating to $3.4 billion and $1.1 billion respectively. This translated into decreased deal activity compared to May 2018 with a 17% fall in volumes and an 83% drop in deal values. However, compared to April 2019, the month saw a promising 6% increase in deal values despite a 29% fall in the deal volumes.

M&A transactions witnessed low traction across domestic consolidations and cross-border acquisitions compared to May 2018. The notable deals included Walmart-Flipkart ($16 billion) and Tata-Bhushan Steel ($5.5 billion) among others. The absence of big-ticket marque deals and delays in/absence of regulatory approvals impacted the overall M&A transaction values. However, the notable deals for the month included India Grid’s acquisition of five electricity transmission assets from Sterlite Power for $1.7 billion, Reliance Nippon Life Asset Management’s stake sale to Nippon Life and others for $860 million and Jawaharlal Nehru Port Trust’s acquisition of Dighi Port for $122 million, which marks the first purchase of a private firm by a government-owned firm under IBC. These deals alone accounted for 78% of the total M&A deal values.

PE investor activity on the other hand remained at par with the activity recorded in May 2018, though it did not match the activity recorded in April 2019, which saw a 68% drop in investment values and a 38% fall in volumes. KKR and GIC’s investment in India Grid to fund its acquisition plans and many other PEs shaking hands with corporates to form a new entity for executing deals remain the key theme for the month.

Sector focus: Transactions in energy, banking, and hospitality and leisure sectors were the key value drivers in M&A. Similarly, energy, e-commerce, and banking and financial services were the key drivers for PE/VC transactions. Considering the transactions in the pipeline, manufacturing, infrastructure, and media and entertainment sectors along with the start-up sectors are expected to be the sectors that will make an impact following the new budget releasing in July 2019.

Outlook: As forecasted, the uncertainty in the deal landscape due to the election results in May is expected to soon fade away in the coming months. Another term for the government will only increase the expectations to streamline the existing reforms and introduce new reforms, making it conducive for renewed deal activity in the coming months. 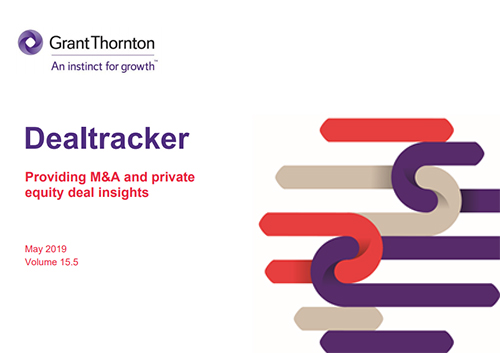