Grant Thornton's inputs change the rules of the game

It is fairly well established that farmer producer companies (FPCs) have played a beneficial role for small and marginal farmers by providing them with improved access to investments, technology, inputs, as well as markets. However, in the myriad of regulations at the state government level, there is always a clause, rule, or law that unknowingly can act as a barrier to growth.

This is a story on how certain clauses in the mandi rules in Rajasthan were posing as a stumbling block for a fledgling but promising FPC. It was time for team Grant Thornton to step in and bring about a change, something that could well now be the norm for other states to follow.

Diwak Mata Farmer Producer Company in Pratapgarh had very poor farmers in its catchment. With around 1,000 farmer members, the FPC route seemed beneficial. Team Grant Thornton provided direct support to the FPC in terms of business planning and market linkages. With a start-up equity of INR 5.5 lakh, the FPC targeted kharif season 2018 for better output. They opened an agri-input retail store after acquiring all required licences to deal in seed, insecticides, and fertilisers. Within just six months of operation, they earned a net profit of around 10%.

Buoyed by this success, the FPC decided to scale up and purchased land where they planned to set up a cleaning and grading unit for grains. The idea was to match the grading requirement of large processors like Sarvodaya in their area, which is into soy and mustard oil. The FPC then signed an MoU with Sarvodaya, making the members happy about the direct linkage and hopeful for an additional revenue realisation of around 7-9%.

However, when they applied for a mandi licence to procure oil seeds, they were asked by officials to deposit a security amount of INR 5 lakh and prove that their net worth was above INR 50 lakh. They were also asked to give a commitment of purchasing 500 MT each of soybean and mustard to be eligible for a licence. However, being a start-up, they could not meet these conditions, and apart from Diwak Mata, 14 other FPCs developed by Grant Thornton India faced a similar issue.

The existing mandi rules became an entry barrier for FPCs to do business. Grant Thornton India delved deeper into the issue to find a solution and established that many states have such kind of entry barriers.

Suggesting a way out in this specific case, Grant Thornton recommended reducing mandi security to INR 1 lakh, removing the clause on net worth, and allowing FPCs to guarantee minimum 100 MT of produce including all commodities instead of 500 MT for each commodity.

Grant Thornton further organised several policy seminars backed by national and global data on best practices and met government officials for their help in removing deal breakers in licencing rules for direct marketing. Finally, when this situation was brought to the notice of Lal Chand Kataria, Minister of Agriculture, Rajasthan, he took an on-the-spot decision to change the existing rules as per Grant Thornton’s recommendations. At that meeting, he expressed that doubling farmers’ income can be a reality when they work with their FPCs to arrange direct supplies of agri commodities to large processors. 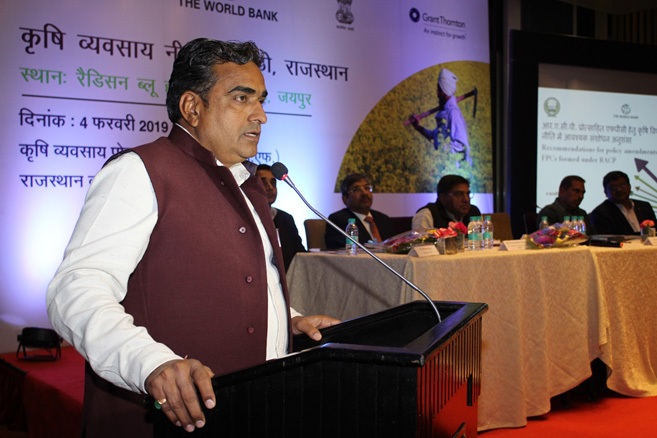 Following the minister’s instructions, a notification to this effect has been issued that will not only benefit Diwak Mata, but more than 280 other FPCs in the state.

FPC representatives discussing their issues with the minister 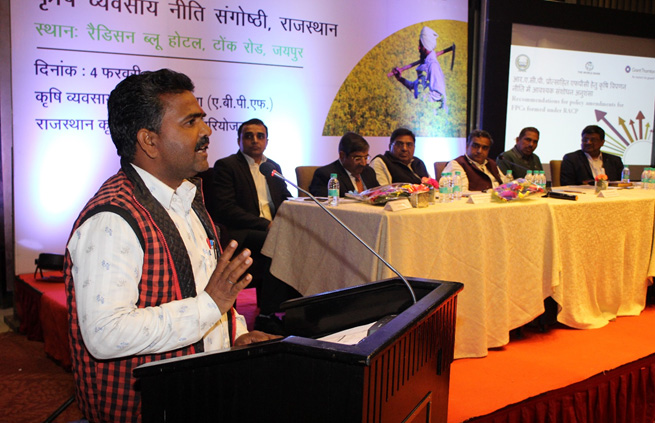 With the help of team Grant Thornton including Shubhendu, Prakhar, and Kuldeep with guidance from V Padmanand and Kunal Sood, Diwak Mata has now rolled out plans that would enable FPCs to earn an additional INR 2-4 lakh on account of direct supplies to large processors. Following Rajasthan’s footsteps, other states are also likely to open up their markets for FPCs.