M&As: Waiting for the big bang

After hitting a three-year low, deal values have picked up once again but only robust initiatives to improve the business environment can ensure a sustained surge, analysts say

If the pace of merger and acquisition (M&A) activity can be considered a barometer of business sentiment, the news from India has been downbeat. According to data collated by Grant Thornton, the first half of the year (January-June) saw an overall drop in deal value for the first time since 2012. But this could easily change, say M&A analysts, if there is progress on the policy front and in India’s “ease of doing business” environment.

The contraction in M&A activity in India contrasts sharply with the upbeat global picture, much of it led by a reviving US economy. According to the EY Transaction Quarterly, several global mega-deals pushed the announced and intended deal value to $1.3 trillion in the second quarter of 2015, up about a third over the second quarter of 2014, although the number of deals did not increase significantly (10,572 deals against 10,425 deals in the two respective quarters). The bulk of these deals have been in the oil and gas industry.

But the M&A news for India is not all gloom. When compared to its BRIC peers, India is one of the better performers, ranking second in terms of deal value behind China and third behind Russia and China in the number of cross-border deals (see BRIC by BRIC).

“Brazil, Russia and China are showing signs of a slowdown, but India continues to have a stable growth outlook which is expected to drive both strategic and financial investor interest in Indian in the near future. This will result in increased momentum on the inbound M&A side,” says Ajay Arora, who heads the M&A practice for EY in India.

In fact, early trends for the third quarter (July-September) suggest a slight pick-up. “We expect it to be better than the third quarter of 2014 mainly on account of a huge jump in outbound deals in the pharma and oil and gas sectors,” says Arora of EY. Preliminary data from EY shows that the deal count is almost the same over the third quarter of 2014, but disclosed deal value has jumped roughly 19 per cent from the same period of 2014. On a trailing quarter basis, the deal count has jumped just 3 per cent but disclosed deal value has grown over 30 per cent.

Big deals are still missing
According to Bloomberg data, however, disclosed deal sizes remain small, most below $1 billion, with only the acquisition of Gammon’s portfolio of six road and three power projects by a consortium of funds managed by Kotak Mahindra Bank and Brookfield crossing that mark. The mega-deals of the early part of 2014 – such as Sun’s $4.1 billion acquisition of Ranbaxy, or Diageo’s $3.2 billion buyout of United Spirits or the Adani group’s acquisition of Dhamra Port and Udupi Power Corporation – are still conspicuous by their absence.

The proximate reason for this can be seen in the disaggregated trends for the first half of 2015. Grant Thornton data shows that the big-ticket deals for this period were mostly in the inbound segment, with a 54 per cent jump in terms of value but a 30 per cent drop in deal count. Outbound deals, on the other hand, saw the deal count rise 33 per cent but value drop by 16 per cent. 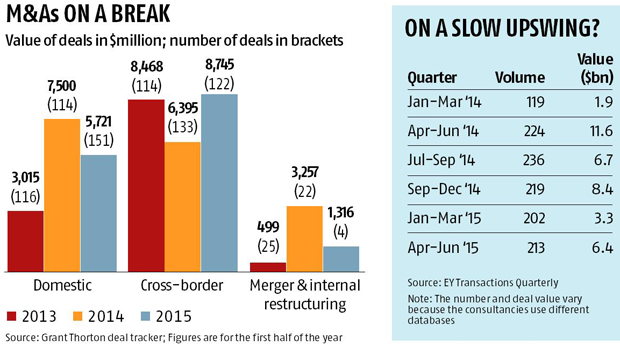 “This was primarily because corporate balance sheets continue to be stretched for cash to invest in inorganic growth since acquisition financing is still not permitted in India, so the focus was on organic growth. Inbound M&As seems to be on the rise perhaps because of the Make in India campaign and the macro-economic indicators being positive,” says Prashant Mehra, partner, Grant Thornton India.

The link between government policy initiative and M&A activity can be clearly seen in the fluctuation in deal values over the four quarters of 2014 (see table: M&As on a break). The first quarter, which coincided with the last months of the United Progressive Alliance in power, saw distinctly subdued activity, only to jump in the April-June quarter when the prospect of a stable government became clear.

That initial euphoria gradually diminished and, combined with global developments, resulted in a contraction in M&A activity. “Given the global slowdown, volatility of the commodity prices and the recent developments in China, global companies have been cautious about doing big-ticket M&As. On the domestic front, M&A activity levels have largely been flat due to the slowdown in reforms and increased leverage in the corporate sector,” says Arora.

Much, therefore, depends on how quickly the government can build the policy momentum created by announcements like Make in India. “Indian assets are expected to remain in focus as inbound and domestic M&As accelerate on the back of a pickup in alternate buy-out financing by private equity players and increased capital market activity – both volume and value will clearly be on an uptrend here,” Grant Thornton’s Mehra predicts.

But, he adds, “The government’s actions on key policy issues and reforms such as the Goods and Services Tax, the new Companies Act, land acquisition, unblocking stalled projects and so on should improve the ‘ease of doing business’ in India and therefore may accelerate transaction activity.” The ball is squarely in the government’s court.

The article appeared in the Business Standard . The article can be found here.