We are pleased to present Valuation Pulse for the third quarter of FY 2020*.

Globally, the valuations of large tech companies have been increasing steadily and are currently at  peak at a whopping 9x revenue and 40x EBITDA multiples. On the back of global economic growth, global IT services companies have also seen recovery in valuation multiples and are currently being valued at a premium EV/EBIDTA multiple compared to large Indian IT companies, except TCS and Infosys that are in line with global peers.

The Indian IT companies have also witnessed a slight uptick in valuation multiples on sequential basis on account of the below positive factors:

However, certain core verticals such as capital markets in the UK, manufacturing and hi-tech are still under pressure leading to softness in valuations of Indian IT companies.

In the Indian scenario of mergers and acquisitions (M&A), both deal values and volumes for the YTD period have shrunk significantly on sequential basis. For the last two quarters, the IT industry has not witnessed any high-value transactions. Among large cap companies, only Infosys and Tech Mahindra have acquired a small/mid-sized company each during the quarter. It seems that the companies have taken a brief pause this year after acquiring targets aggressively in the past to build digital capabilities and are now focusing more on acquiring strategic targets.

However, the Private Equity (PE) deal activity remained robust with the number of investments in tech start-ups going up on a yearly basis. 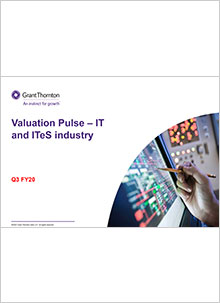