The Indian IT industry has demonstrated its coming of age through its resilience in 2013, when global and domestic markets continued to showcase a lack-lustre performance. As per the industry body NASSCOM, the IT-BPO industry, aside from crossing the US$ 100 billion mark in 2012, also clocked a 13% growth in exports and a 9.5% growth in sales in the domestic market in 2013. Further, for the fiscal year 2015, exports are expected to grow at an annual rate of 12.3%, with domestic growth expected to clock 14%.

The Indian IT/ ITeS industry has also held its own on the deal-scape for CY 2014. As per Grant Thornton‟s Dealtracker, the sector has led the mergers and acquisitions (M&A) activity charts for the year in terms of value, accounting for more than 20% of the total M&A deal values during the period.

Within the overall IT industry, software product has been one of the fastest growing sub-segments. This is evident from the fact that there has been a significant increase in the number of Indian start-ups focused on developing niche products. As per NASSCOM, over 70% of India‟s software product companies have been incorporated post 2010. The software products market in India, which includes B2B software, mobility products and Internet and consumer/e-commerce products, was expected to grow at 14% in 2014. Further, as per the Indian Software Product Industry Roundtable, India has the potential to build a US$ 100 billion software product industry by 2025.

Needless to say, the growth rate clocked by the sub-segment over the past and its potential growth rate over the near future are among the key drivers of the deal activity. Indian software product companies such as Capillary Technologies, Knowlarity and Linguanext have secured Private Equity (PE) funding. Further, several large IT firms are now acquiring software product companies to move up the value-chain and follow a non-linear revenue strategy. For example, Wipro Limited recently acquired an Australian analytics product firm, Promax Applications Group, to strengthen its analytics offering. It has also set up a fund to invest in early stage product and niche companies. It is also clear that the fund raising/ M&A activity in the software product segment is expected to increase further. Given this heightened transaction activity, Valuation becomes one of the key focus centres for an entrepreneur /promoter of a software product company seeking to raise funds, or an acquirer looking to acquire a software product company. In order to optimally leverage such opportunities, it becomes imperative to know how software or a software-related technology asset is valued.

Some of the other reasons why valuation of software is important are as follows:

• For financial reporting purposes: If the acquirer is reporting its financials under standards such as USGAAP, IFRS and IndAS, the value of the technology of the target would have to be recognised as an intangible asset on the acquirer‟s balance sheet. This also holds true in the case of acquisition of an IT service company if the target has some off-the-shelf software or if it has internally generated software

• Transfer of assets: Technology related IP is often held by one company in a group, which, in turn, charges royalty or other financial arrangement from other group entities for use of the IP. In such cases, valuation of the IP is required for transfer of IP to the holding company from the entity where the IP initially resides. Besides, it is also needed for transfer pricing purposes. 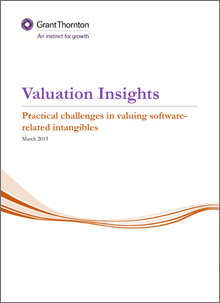