Top Indian companies in the UK in 2016 revealed

Our 2016 India Tracker has identified India’s best-performing UK subsidiaries. Find out who they are and their impact on the UK economy.

Indian companies continue to play a major part in the vibrancy of the UK economy, according to our India Tracker 2016. In fact, this year the number of Indian companies growing at more than 10% – the key benchmark for inclusion on our list – has nearly doubled.

While the total number of Indian companies in the UK has increased only slightly in the last year, the total turnover of the fastest-growing Indian companies in the UK has risen 18% in the same period – from £22 billion to more than £26 billion. To a large extent, the impressive rates of growth demonstrated by these companies reflect the fast-growth sectors in which many of them operate – notably technology, telecoms, pharmaceuticals and financial services.

At least for the time being, Indian companies invest more in the UK than they do in the rest of the EU combined. What remains to be seen is how attractive the UK will be to these businesses in light of the upcoming EU referendum and possible ‘Brexit’.

You can read the full story in the attached report, including our list of the 62 fastest-growing Indian companies in the UK. Alterntavely, scroll down to see our infographic highlights (click to view larger, opens in a new window) and read more about the India Tracker. 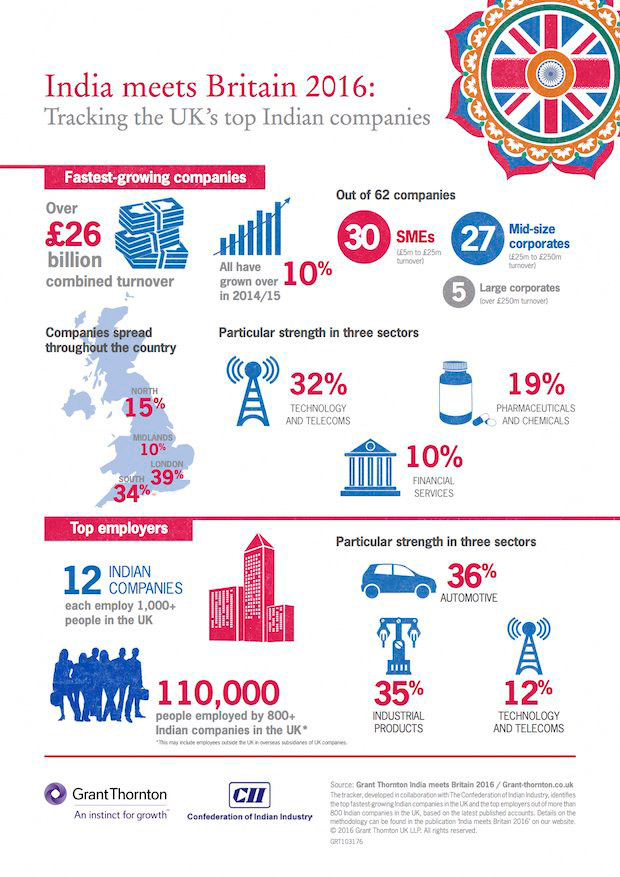 About the India Tracker

The Grant Thornton India Tracker, developed in collaboration with the Confederation of Indian Industry, monitors UK businesses with ultimate Indian parent companies or owners to identify the fastest-growing Indian companies in the UK by turnover, as well as the top Indian employers.

The tracker provides insight into the scale, business activities, locations and performance of Indian-owned companies making the biggest impact in the UK.

To meet the tracker’s inclusion criteria, Indian corporates (not including UK branches of Indian companies) must have a minimum two-year track record in the UK, turnover of more than £5 million and year-on-year revenue growth of at least 10%, based on the latest published accounts filed as at 29 February 2016. 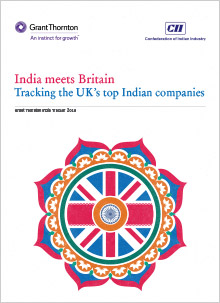