In association with IVCA, Grant Thornton presents the sixth edition of The Fourth Wheel which captures recent developments and trends in the private equity (PE) deal landscape. The data presented in the study is based on Grant Thornton’s Dealtracker along with views from leading PE/VC fund houses. The report also tracks the deal sizes and provides an in-depth analysis on the deals and investments across sectors.’

Over the years, PEs have played a transformational role in the Indian corporate landscape - from being mere financial investors, to strategic advisors, minority stakeholders to taking greater control – they have done it all. This gradual shift in PE mindset resulted in several new themes in the PE dealscape: PE-backed buyouts, consolidation among PE-backed entities, sectoral platform creation by large PE houses, PE-backed cross-border/domestic acquisitions, etc. They have created significant value across all stages of a business life cycle.

Key highlights of the publication:

We hope you will find this report informative and look forward to your feedback. 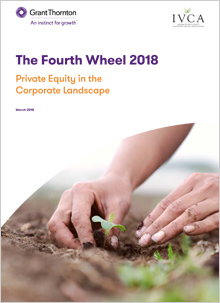