In several ways, the Indian real estate sector bid adieu to 2014 on a positive note. The formation of the new government with a strong majority and its first Budget that gave a significant impetus to the sector were the bright spots in 2014. Much progress has been made through several policy reforms as well. SEBI codified REITs norms and the government announced the tax pass through. FDI norms were relaxed for investments in real estate, Real Estate Regulation Bill got its final shape and the land acquisition act received the Presidential assent. “Housing for all” has been adopted as the new mantra and the smart city concept is gaining traction.

The winds of change are now blowing. Inflation, including the house price component, has now been reduced to the lowest level in the last few years. Property buyers are back in force in most cities as enquiries have rebounded, and developers are finally reading the writing on the wall more accurately and are trying to bridge the demand-supply gap.

Historically, developers have always had wonderful Diwali. However, bucking the trend, the festival of lights failed to bring cheer to the Indian real estate sector in 2014. According to analysts, although the season was better than the previous season in terms of sales and volumes, but the performance was still below expectation. The festive season failed to revive the growth momentum of the sector, as was anticipated. Besides, considering the RBI‟s policy to keep the current interest rates unchanged with a view to safeguard against further inflationary trends, it is probable that several more months will be needed for the market to revive.

Meanwhile, it is interesting to note that several Private Equity players are gearing up for REITs, picking up large chunks of unsold inventories, which is helping developers increase construction activity. E-commerce companies, with some significant investments in recent past are also gearing up to facilitate sales/ rentals of RE units. Further, Private Equity funds and sovereign wealth funds have pumped millions of dollars into the country‟s real estate, indicating that they are bullish about the future of the market.

Going forward, the real estate industry as a whole will have to focus on faster implementation of projects and deliver on time to the customers. They will have to also improve the quality of construction to cope with the growing expectations of customers and investors. In the last few months, vital signs of India’s economy have improved and policy makers are taking significant steps to improve growth prospects. This will have a positive effect on the reals estate sector and 2015 will surely be a better year for the industry. 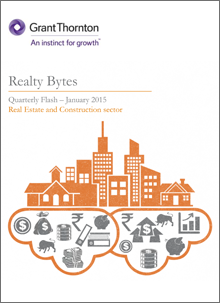