One more push required by govt for popularising REITs

The required attributes of an SPV where REIT can invest is quite straight jacketed. While regulatory constraint of creating an investor friendly instrument is understandable, more tax sops can be provided to encourage developers to prefer REIT.

REITs have been in existence in developed economies since several years and provide a stable investment alternative for retail investors at large as well as the real estate sector. It is expected that REITs are likely to emerge as a preferred form of asset-backed investment with established revenue streams, and will go a long way in protecting the interests of investors seeking exposure in real estate as an asset class. REITs will also create exit opportunities for developers and financial investors allowing them to move completed assets to REIT and provide liquidity.

However, the industry’s reaction to REIT was lukewarm as a lot of creases had to be ironed out and thus high expectations were set for the current budget to bring about requisite changes. The Finance Minister hit the right chord in this regard by taking cognisance of the stakeholder’s sentiments and bringing some of these changes as undernoted with respect to REIT taxation:

Sponsors, who would essentially be developers wanting to offload their rent generating assets under the REIT (by acquiring units of REIT in exchange of their shareholding in a company where such assets reside – being the SPV), only got a deferral of their capital gains tax arising out of such exchange to the point when they sell the units of the RIET. The framework for providing such a deferral was such that the entire gain of the Sponsor, i.e. the difference between the sale price of the REIT units and their investment in the SPV was taxed, whereas the gains of other investors were exempt or taxed at 15% depending upon whether it was a long term or a short term gain. Thus the Sponsors were put in a detrimental position as the preferential capital gains regime available to other unit holders was not available to the Sponsor at the time of transfer of their units. To bring parity between Sponsors, vis-a-vis, other unit holders with respect to capital gain taxation, the same tax treatment shall now be applicable (as per the Budget 2015 proposal) to all unit holders in the trust at the time of offloading of units. In fact the Sponsors may be considered to be in a better position, as not only the accretion in value of their units of REIT has a preferential tax treatment, the accretion in value of their investment in the SPV also has the same treatment.

The REIT has now finally been bestowed with near full pass through status, as now even the rental income would be exempt in the hands of REIT and would be taxable in the hands of the unit holder.

The resultant tax regime of REIT, incorporating the Budget 2015 proposals can be summarised as below: 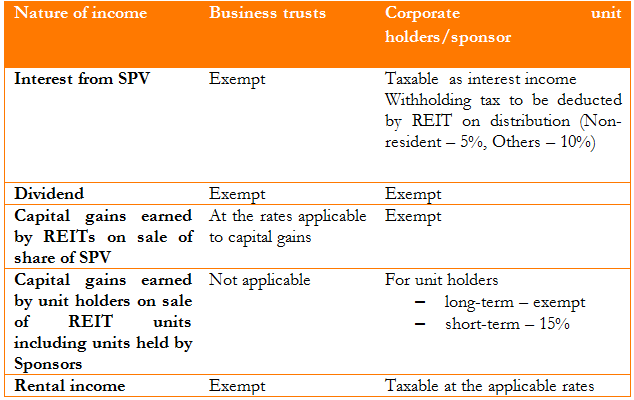 REIT was introduced to make available fresh equity in the real estate sector in India leading to reduced pressure on the banking system by attracting long term finance from foreign (presumably) and domestic sources for the sector. While the above changes are welcome, some other, and perhaps equally pertinent demands which still need to be addressed are as follows:

1. The required attributes of an SPV where REIT can invest is quite straight jacketed. While regulatory constraint of creating an investor friendly instrument is understandable, more tax sops can be provided to encourage developers to prefer REIT. For example, tax exemption can be provided for swap of REIT assets (rental building) directly like the one that is proposed for swap of shares of an SPV 2. REIT units may be made to qualify as long term assets after expiry of 1 year, so that there is a level playing field between equity shares and REIT units 3. Regulatory framework needs to be made to facilitate FDI in REIT and also enable non-resident Sponsors to participate by swapping shares of SPV under automatic route 4. The regulations provide that not less than eighty per cent of value of the REIT assets shall be invested in completed and rent generating properties. While compared to the earlier draft regulations which prescribed that at least 90% of the value of the REIT assets shall be in completed revenue generating properties, there has been flexibility in the final REIT regulations, however, it still limits the ability of the REIT to capitalise on capital appreciation benefits that come with investment in under construction assets. 5. The REIT regulations provide that not less than 75% of the revenues of the REIT and the SPV, other than gains arising from disposal of properties, shall be, at all times, from rental, leasing and letting real estate assets or any other income incidental to the leasing of such assets. Internationally, the focus is more on completed assets. The regulations seem to be designed to not expose retail investors from the construction development risks, however, in the bargain the REIT would perhaps fare badly in comparison to other investment opportunities. With the present outlook on the rental yield and capital appreciation from commercial real estate, it would have to be seen how the markets reacts to the REIT as a viable investment alternative.