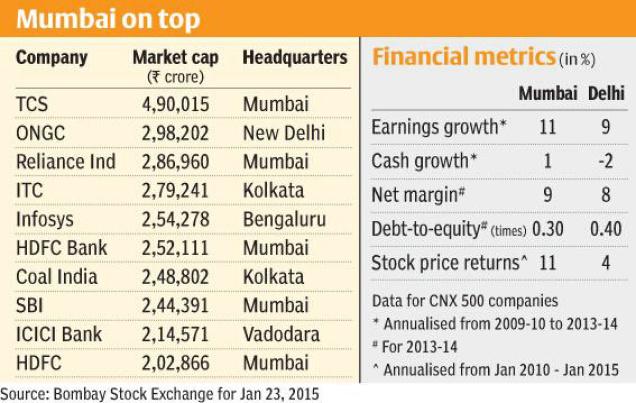 New Delhi may be the seat of political power, but Mumbai is the still the financial capital, attracting companies of every hue. Also, companies headquartered in Mumbai have performed well over the years and rewarded investors better.

A BusinessLine analysis reveals that of the CNX 500 companies, 146 have their headquarters in Mumbai while 57 are run from New Delhi. Mumbai-based companies account for over a third of the market capitalisation, against 17 per cent for New Delhi.

TCS and Reliance Industries, two of the largest companies in the CNX 500 index, based on market capitalisation, are run from Mumbai. Five of the top-10 companies are from Mumbai while New Delhi has only one in the list — ONGC.

The popularity of Mumbai-based companies is partly due to the healthy stock price returns they have delivered over the years. If you had invested in Mumbai headquartered companies in the CNX-500 index, you would have enjoyed a median return of 11 per cent annually over the last five years. Those who bet on Delhi-based companies earned a meagre 4 per cent yearly return over the same period.

This performance can be explained by the relative financial metrics. For instance, in the last five years, the median annual earnings growth of companies that call Mumbai their home was 11 per cent. The figure was 9 per cent for those in the national capital.

It might not be easy to unseat Mumbai from this coveted position in a hurry as it continues to be the preferred choice for new businesses.

Of the 53 companies that listed between 2010 and 2014, 24 set up their main offices in Mumbai. Only five made New Delhi their home. Many of the recent IPOs, such as Shemaroo Entertainment and Sharada Cropchem, were by Mumbai-based companies.

Mumbai is a powerful financial centre with many banks and financial institutions having head offices in the city. Being close to the top decision-makers of funding institutions improves the chances of accessing funds.

The presence of big corporate houses — Tatas, Reliance, Godrej and Mahindras — and the fact that the city is home to companies from a wide range of sectors increases the chances of landing a plum job.

Job growth in the city has been robust as well. For instance, hiring site Naukri’s job index shows 11 per cent year-on-year growth in hiring in Mumbai in December 2014.

“Companies in infrastructure, power and energy benefit from being close to their respective ministries. So they may prefer to set up operations in New Delhi to better understand regulatory issues,” Lahiri observes.

In fact, lower rent and proximity to the ministries were two reasons why Air India shifted its headquarters from Mumbai to New Delhi in 2013.

And what are the other centres that are attracting new businesses? “Cities such as Pune and Bangalore are becoming a hub and Ahmedabad could be another potential destination for the future,” he says.

The table on top ten companies by market capitalisation that accompanied the report was corrected as it contained data that was either wrong or outdated.

The article appeared in the Hindu Business Line. The article can be found here.