We are pleased to present the Monthly Dealtracker, which captures the deal activities in India during the month of October 2020.

Powered by big ticket Private equity (PE) transactions, October 2020 reported 105 transactions with deal values aggregating to USD 7.4 billion. While the deal volumes and values reported for the month indicate a 5% and 40% growth respectively, as compared with October 2019; the month-on-month trend for deal volumes and values as compared with September 2020 reflects a 9% and 11% decline respectively, primarily due to inactive mergers and acquisitions (M&A).

PE’s rush to seize the opportunity created by Reliance Retail and by market dynamics in the commercial real estate and pharma segment, pushed the aggregate PE deal values to USD 6.6 billion. This was the highest monthly PE activity since 2011.

Sector Focus: While the retail and consumer, IT & ITES sectors were desired both in M&A and PE, transactions in real estate, banking, pharma and start-ups were also preferred by the PE investors. PE investments in Reliance Retail alone contributed to 45% of the overall deal values for the month. Overall, 80% of the overall  deal values for the month were transacted in retail and consumer, real estate and IT & ITES. Amazon’s claim over Future Group despite the Reliance-Future Group agreement and Flipkart’s investment in Aditya Birla Fashion reflects not just market expectation from the domestic retail and consumer segment but also an appetite for more transactions.

Outlook: While the increase in indirect tax collections is an indicator of increased consumer activity, the uncertainty arising from the second wave of COVID-19 pandemic in some countries and global geo-political scenario demands cautious approach. There definitely exists opportunities for increased transaction activity, however, the pace of its consummation will depend on sustainability and visibility in respect of the aforesaid factors. 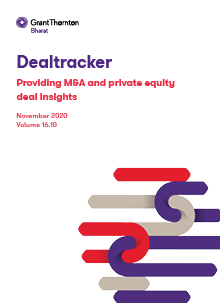