Despite the second wave of COVID-19, 44% increase in deal values and 21% in deal volumes compared with May 2020
Contents

May registered 121 transactions aggregating to USD 8.2 billion. This translates to 21% hike in the deal volumes and 44% increase in deal values compared with the corresponding month last year. This came on the back of mergers and acquisitions (M&A) deal activity that was limited in May 2020 due to a nationwide lockdown consequent to the first wave. During the current second wave, deal activity continued unhindered as corporates were in advance stages of deal making and had adapted to the covid situation. Since lockdowns are more ‘localised’ now, the deal activity is expected to continue the trend.

Recent deal activity indicates that deal makers have recognised that there will be short-term hiccups and disruption from COVID-19, but the growth prospects of select sectors/businesses are strong. Government’s impetus to manufacturing sector and infrastructure is likely to bring in deal interest in those spaces too. With streamlined vaccination programme, favourable policy initiatives and global outlook, the recovery is expected to be immediate, which should be conducive for more deal activity. 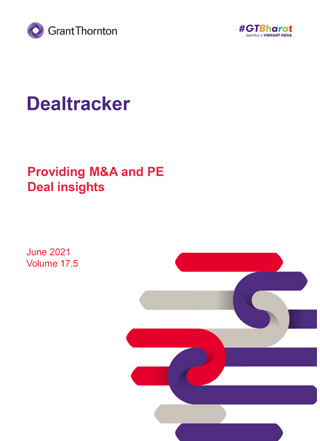