We are pleased to present the Monthly Dealtracker that captures the recent deal activities in India.

Deal activity in January 2020 started on an encouraging note compared to December 2019 and January 2019. The month reported 108 transactions aggregating to USD 5.8 billion, which is 2.5x and 1.8x the value of deals reported in the previous month and comparative period in 2019 respectively.

Sector focus: Transport and logistics, IT and ITES, start-up and manufacturing sectors contributed to 84% of M&A deal value, while four M&A transactions each were reported in the IT and ITES, manufacturing and pharma, healthcare and biotech sectors aggregating to 42% of the M&A deal volumes. The IT and ITES, start-up, manufacturing, BFSI and pharma are sectors expected to contribute to M&A transactions. The energy and natural resources, e-commerce, start-ups and transport and logistics sectors attracted 69% of PE/VC investments by value. The start-up sector contributed to 53% of the deal volumes. The aforesaid sectors along with BFSI are expected to garner PE/VC investments.

Outlook: The year started on a positive note and the Union Budget has also attempted to incentivise further investments by offering cut in tax rates along with other fiscal policies. The policies rolled out by the government are expected to act as a catalyst for deal activity in India. 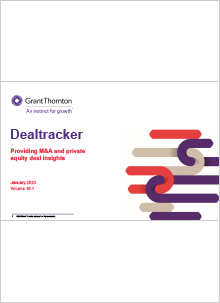