We are pleased to present the Monthly Dealtracker, which captures the deal activities in India  during November 2020.

With 149 private equity (PE) and mergers and acquisitions (M&A) transactions, November 2020 recorded the highest number of deals since November 2015. The transaction value was around USD 6.9 billion. In terms of deal volume and value, the month reflected a growth of 19% and 52%, respectively, as compared with the same period last year.

Forty-two M&A transactions aggregating to USD 2.7 billion were reported in November 2020. The month was dominated by four big-ticket domestic transactions, primarily driven with the objective of consolidation, brand acquisition and achieving the leadership position in the respective sectors. Embassy Office Parks REIT’s acquisition of Embassy Tech Village for USD 1.3 billion was a notable transaction for the month. Inbound transactions included Indorama PTE’s acquisition of the fertilisers business of Grasim Industries.

The month reported 107 PE transactions aggregating to USD 4.2 billion, which is about 32% compared with the last month but a 41% increase when compared with the last year. Among the key highlights of the month was a USD 1.3-billion investment by the sovereign wealth fund of Saudi Arabia, The Public Investment Fund, in Reliance Retail Ventures. This indicated increasing interest from global PE funds in Reliance Group’s ventures. Blackstone’s acquisition of certain commercial, retail, and hotel real estate of Prestige Group for USD 1.24 billion indicated the stress in the real estate sector.

Sector focus: The real estate; retail and consumer; manufacturing; pharma; agriculture and forestry, and infrastructure sectors witnessed nine high-value transactions aggregating to USD 5.3 billion, which constituted about 77% of the overall deal values reported in the month. About 86 transactions were reported in the start-up segment, which included nine M&A transactions and 77 PE transactions aggregating to USD 764 million, which is about 58% of the total volumes of the month. The real estate, retail and consumer, pharma and IT&ITES are expected to be the evergreen sectors for M&A and PE transactions.

Outlook: The COVID-19 pandemic has created several transaction opportunities by identifying sectors that remained insulated or thrived during the pandemic, indicating high potential and highlighted the significantly impacted ones, an indicator of the need for more resources. The hopes for a vaccine in the near term and the stimulus by the government in various forms and measures are expected to heat the transactions landscape and make all stakeholders seize the opportunities created. 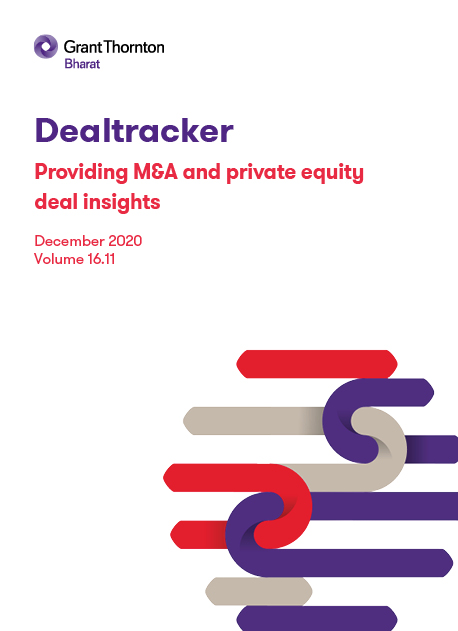