July 2021 has been a promising month for deal activities with India.Inc recording 181 deals amounting to USD 13.2 billion. There has been a significant increase in deal volumes at 66% and a 3% increase in the deal values compared to July 2020. This is also the highest record volume for any given month since 2005. The market is showing optimism despite the possibility of a third wave of the COVID-19 pandemic.

The deal activity in mergers and acquisition saw 36 deals worth USD 5.6 billion in July 2021. Although the volumes were up by 13% the deal values declined by 37% compared to July 2020. This was mainly due to the shortfall in big-ticket transactions. There were 145 deals valued at USD 7.5 billion in the private equity (PE), venture capital (VC) investments segment.

July 2021 saw 181 deals valued at USD 13.2 billion and the highest volumes in a month since 2005. The latest edition of Dealtracker captures the deal activities in July 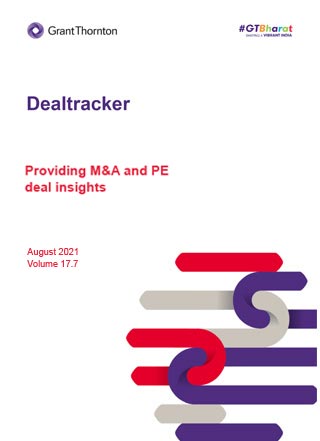