We are pleased to present the Monthly Dealtracker, which captures the deal activities in India during August 2020.

August 2020 reported 96 transactions with deal values aggregating to USD 1.49 billion, the lowest in value terms in the last 31 months. Deal volumes experienced a decline of 12% compared to July 2020, however, they were stable as compared to August 2019. Overall, deal values plummeted by 55% and 88% as compared to August 2019 and July 2020, respectively. Absence of large ticket transactions during August 2020 led to a sharp fall in deal values. On year to date basis, the overall deal volumes and values reported 2% and 13% growth respectively, compared to the same period in 2019.

Mergers and acquisitions (M&A) activity in the earlier months of 2020 was fueled by inbound and domestic activity. This was primarily driven by strategic investments in Reliance Jio and Reliance Industries Limited by foreign partners, domestic Insolvency and Bankruptcy Code (IBC) and consolidation transactions. Domestic transactions led the deal statistics during the month propelled by the need to strengthen product offering, market consolidation and conclusion of distressed transactions.

Sector focus: Start-ups topped both M&A and PE/VC deal values. This included Byju’s largest acquisition to date and Reliance Retail’s acquisition of NetMeds. Overall, start-ups constituted 63% and 39% of the overall deal volumes and values, respectively for the month. Consortium deals, i.e., more than one PE participating in a single deal constituted about 70% of the PE/VC transactions, thereby indicating level of certainty about the future and/or risk appetite of the investors. Other sectors that attracted significant transactions included banking and financial services and IT and ITeS.

Outlook: The current pandemic has impacted companies of all sizes. Large corporates burdened by debt could be possible acquisition targets, while companies with high cash burn will seek fund infusions. Similarly, start-ups that have been able to scale up consequent to their tech platforms will be sought after targets for market consolidation. Though transaction opportunity exists in many forms, the ability to consummate large transactions will depend on the risk appetite of the corporates and PEs. 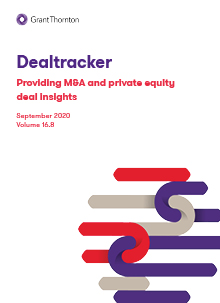