The adoption rates of farm equipment has been on a rise. Higher productivity, increase in agricultural exports, labour shortage and migration and increase in labour cost, are some of the factors driving farm mechanisation in India.

Our knowledge paper, ‘Mechanisation: Key to higher productivity to double farmers’ income’ provides an in-depth analysis of farm mechanisation sector in India. The report also highlights the existing challenges faced by the small and marginal farmers and makes recommendations on how to increase productivity and farm equipment penetration. 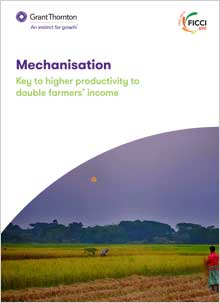