Welcome to the Winter edition of Grant Thornton’s India Watch, in association with the London Stock Exchange.

A look back at the performance of the Grant Thornton India Watch Small Cap Index in 2014 shows that the Index fell by 40% during the year, reflecting the negative impact of investors’ concerns over the slowing down of the economy, inflation and the fiscal deficit.

However the Index remained relatively flat in the fourth quarter of 2014, with a fall of just 4%, suggesting greater yet cautious investor optimism following the change in government and a number of new measures introduced to bolster inward investment. Despite this apparent rally in investor confidence in the fourth quarter, there is some way to go before we see a full recovery in confidence in Indian issuers in the London markets.

The Indian economy has gathered pace as the government tries to ‘walk the talk’ on key reforms. Prime Minister Narendra Modi is riding high on the improving prospects for the economy, with business sentiment picking up and foreign investors betting big on a market of 1.2 billion people.

Estimates by a number of international agencies and think tanks point to a sustained economic recovery. Indian M&A and private equity activity was at a three-year high in 2014 on the back of these more bullish expectations for economic growth. There were eight separate billion dollar-plus M&A transactions during the year, with more big ticket deals in the pipeline for 2015.

In this issue we also discuss the potential benefits of depository receipts (DRs) for Indian companies looking to raise capital in foreign countries that has been largely inaccessible to them previously.

While foreign investment in India has increase from US$2.3 billion to US$27.3 billion over the last decade, the DR investment route has failed to keep pace, necessitating significant revisions to India’s existing DR scheme.

The Grant Thornton India Watch Small Cap Index fell by 40% during 2014 compared to falls in the FTSE 100 and FTSE AIM 100 Indices of 3% and 21% respectively. However the Index remained relatively flat in the fourth quarter, with a fall of just 4%, reflecting cautious investor optimism following the change in government and a slew of measures introduced in the second half of the year to bolster inward investment. 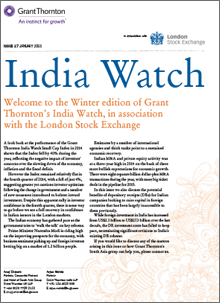