The Grant Thornton India Tracker, developed in collaboration with the Confederation of Indian Industry, monitors UK businesses with ultimate Indian parent companies to identify the fastest-growing companies by turnover, as well as the top Indian employers.

The Tracker provides insight into the scale, business activities, locations and performance of Indian-owned companies making the biggest impact in the UK.

To meet the Tracker’s inclusion criteria, Indian corporates must have a minimum two-year track record in the UK, turnover of more than £5m and year-on-year revenue growth of at least 10%, based on the latest published accounts filed as at 1 February 2015.

Indian companies continue to play an important role in the UK economy, according to our India Tracker 2015. Our research shows that the top fastest-growing Indian companies in the UK generate some £22 billion of turnover – this figure in last year’s Tracker was £19 billion. Tata Motors continues to dominate, accounting for 90% of the total. The Tata Group remains one of the largest foreign investors and employers in Britain today.

There is of course a long history of healthy bilateral trade between India and Britain. UK Prime Minister David Cameron announced in 2010 that the UK would aim to double bilateral trade with India from £11.5 million to £23 million by 2015 and it seems to be on
track to achieving this. India accounted for 17% of the UK’s foreign direct investment (FDI) projects recorded in 2013/14, creating 4,482 new jobs, according to UKTI.1 Our research also indicates that the number of Indian companies in the UK has risen by 14%
from 2013.

2014 was a groundbreaking year for India with the election of the probusiness Modi Government, creating new opportunities for deeper ties between the two countries. The UK Government last year announced £120 million of new investment in the UK from India. Chancellor George Osborne claims that the UK has boosted its exports to India by 50% and imports by a third since 2010, according to a report in The Telegraph.

Business Secretary Vince Cable visited India in October last year to reinforce the message that ‘Britain is open for Business’. He subsequently announced funding for 400 scholarships for Indian engineering and IT students who want to study in the UK and plans to launch new measures to encourage business investment in the UK.

Others have acquired UK businesses primarily to gain access to existing distribution channels for products manufactured at lower cost in India for example companies in the pharmaceuticals sector, such as Wockhardt UK Holdings Ltd and Nicholas Piramal.

These trends are underlined by the familiar language, tax and legal systems that have traditionally attracted Indian companies to the UK. The UK also offers generous tax credits for research and development. 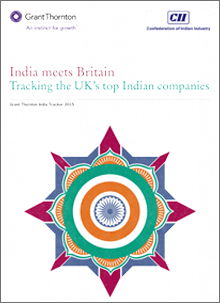