We are pleased to present the H1 2020 Dealtracker which captures recent deal activities in India.

Amid the highly uncertain situation, India Inc. recorded around 600 deals worth USD 36.5 billion. This was a hike of 15% in the deal values despite marginal fall in volumes compared with H1 2019. Relative to the shrunken size of the mergers and acquisitions (M&A) pie, private equity (PE) is still maintaining its big slice of deals and is likely to grow. While the big boys of India Inc. like Reliance Industries Limited, Bharti Airtel, Kotak Mahindra Bank and Adani Group are cruising through the lockdown period with ease, small cap and mid cap companies are facing severe cash flow and valuation issues. However, to tide over the liquidity crisis created by the COVID 19 pandemic, Securities and Exchange Board of India (SEBI) has eased capital raising norms for listed companies. The relaxations provide a good opportunity to promoters and investors who are looking at increasing their stake at attractive valuations.

The silver lining is Reliance Jio Platform’s USD 15.2 billion fund raise in a span of less than two months resulting in the hike in values this year. This deal has not only set new benchmarks in Indian corporate history, but that this was achieved amidst a global lockdown is notable. While H1 2020 recorded 15% and 22% increase in deal values compared with H1 2019 and H2 2019 respectively, barring Reliance Jio’s deal, the year saw a significant fall of over 70% in deal values on a year on year and 30% fall over the preceding six months (July December 2019) period.

India Inc.'s M&A recorded around USD 19 billion across over 160 transactions, a marginal 6% increase over H1 2019 with 30% fall in the deal volumes. Compared to previous six months (July December 2019), the year saw values growing over two times despite over 20% fall in the volumes. On the flip side, owing to closed borders and muted deal activity resulting due to the pandemic, H1 2020 recorded the lowest cross border deal volumes since 2011.

Contrary to M&A volumes, PE volume seems to be on the rise. Similarly, owing to Jio Platform’s USD 9.5 billion fund raise from global investors, the year witnessed a new record with over USD 19 billion worth of investments for the first six months period, across over 430 investments. This marked an increased trend with over 25% growth in investment values and over 10% in deal volumes. Interestingly, the year

also recorded an increase in investment volumes by venture capital firms in the early growth and late stage deals since 2011.

Sector focus: The core sectors, such as telecom, energy, banking, transport and logistics, and IT and ITeS, attracted big ticket transactions and investments during H1 2020. While the start-up sector remained preferred by PE and venture capital (VC) investors, the IT and ITeS sector remained active with highest number of consolidations. Strategic and financial investors are seeking unique themes to invest in, with the technology sector expecting a strong demand. The consumer retail companies have witnessed a dramatic drop in footfalls at stores and plunging sales have resulted in an adverse impact on the sector’s performance. The impact was also witnessed in the auto, aerospace and defence, manufacturing and real estate sectors. Post crisis, digital maturity and COVID 19 resiliency will determine strategy of players across various sectors, with companies already future ready with digital capabilities and cost elasticity.

Outlook: The COVID-19 pandemic is undoubtedly one of the biggest global events of our lifetimes, presenting unprecedented challenges to many industries, governments and people around the world. A continued spread and its aftermath will significantly slow down business. To counter the situation, the government and the regulators have been prompt in responding by providing economic stimulus packages, shoring up liquidity and providing forbearance on several financial and compliance commitments. A strong budget with focus on demand stimulation, improvement in government spending and boosting liquidity will further enhance the market activity. The latest International Business Report (H1 2020) published by Grant Thornton shows the optimism level of businesses at 63%, putting India among the top five countries in global rankings. Similarly, the businesses also reflect positive sentiments in terms of revenue generation with 58% expecting an increase, thereby giving an outlook towards continued market activity amid the pandemic.

Further, with an economy that has the backbone of a strong and rising domestic consumption and being a preferred emerging economy for global investors, India will perhaps see a gradual increase in corporate M&A though only select sectors, such as technology, as well as an increase in inbound investments from the latter half of H2 2020. Specific to corporate M&A, the deal activity will be driven by consolidation in key sectors due to correction in valuations as well as small medium enterprises/micro, small and medium enterprises (SMEs/MSMEs) lack of ability to grow or sustain their business in these troubled times. With this, we stay optimistic and expect to see a positive market sentiment soon. 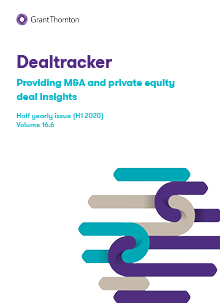