Recently, the Mumbai zonal unit of Directorate General of GST intelligence has unearthed frauds relating to the GST of more than INR 2350 crore. In another case, the anti-evasion branch of the CGST has busted a racket relating to input tax credits (ITC) through fake billing of INR 1278 crore. A nationwide drive has been undertaken by the GST authorities and some arrests have also been made. This has become a major issue and the government is working round the clock to tackle the perils of fake invoices. The law committee of the GST Council has suggested that the registration process for new applicants should be tightened to eliminate fake invoices. We may witness more aggressive stance by the government and the regulatory authorities to address such issues.

With an aim to make Indian manufacturers globally competitive and enhance exports, the Union Cabinet has given its approval to introduce Production-Linked Incentive Scheme for 10 key sectors. These priority sectors include specified electronic products, automobiles and auto components, pharmaceutical drugs, telecom and networking products, textile products, and food products.

On the judicial front, the Madras High Court has quashed the levy of interest on the ITC portion. Recently, the CBIC has also clarified that the interest needs to be recovered only on net cash tax liability. The decision by the Madras HC is in sync with position taken by the government.

In this edition, we share our views on GST issues relating to the cross-border transactions.

If you want us to cover any specific topic, we will be happy to do so.

We hope you will find this edition informative and interesting. 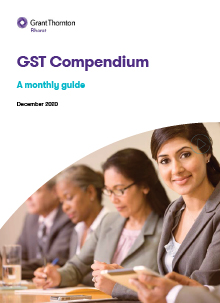