We are pleased to present the Quarterly Dealtracker, which captures the deal activities in India during Q1 2020.

Several global economic events such as the US-China trade war escalation, prolonged Eurozone slowdown and no-deal Brexit towards the end of 2019 were indicators of the uncertain times and global recession. The combined impact of the global economic indicators and downward trend in the Gross Domestic Product (GDP) growth rate, which saw Indian economy expanding 4.7% year-on-year (y-o-y) in Q4 2019, was evident in the deal trends for that quarter. The Q4 2019 GDP rate saw the weakest growth rate since Q1 2013. However, despite uncertainties, 2020 started on a positive note complemented by a supportive Union Budget 2020. Things changed with the COVID-19 crisis. In the wake of this pandemic, March 2020 witnessed a slowdown in activity thereby impacting the overall deal activity in Q1 2020.

Even as COVID-19 threatens to challenge the overall annual deal environment, a reasonably strong Q1 2020 with as many as 313 deals demonstrated a 7% growth in volumes compared to Q1 2019. The total values stood at USD 14.9 billion, which is a 26% decline y-o-y. Q1 2019 saw USD 7.2 billion Arcelor Mittal–Essar Steel transaction; absence of a similar such transaction in March 2020 resulted in 77% drop in the March deal values.

The hopes of strategic investors, who expected a deal-making trend this year, were sabotaged with the steep market drop triggered by COVID-19. Many companies have had to halt mergers and acquisitions (M&A). Consequently, the quarter recorded 94 deals making it the lowest quarterly deals since 2011. This translated into a 17% drop in the deal volumes compared to Q1 2019 and values stood at USD 10 billion, an 18% decline over the same period last year.

Private Equity (PE) investment activity, on the other hand, continued its positive trend with 219 deals in Q1 2020, recording 22% spike over Q1 2019. However, the investment values slumped to USD 5 billion from USD 8 billion in Q1 2019. Despite the subdued macroeconomic outlook, PE activity did not slow much in 2020. Financial investors continued to make deals, find exits and raise even more capital fueled by encouraging reforms and relaxed investment norms announced for fund managers or general partners in the Budget. Additionally, to satisfy their appetite for PE investments and enhance their returns, limited partners (LPs) are increasingly willing to co-sponsor deals with global partners (GPs) to either access larger deals or to deepen their relationships with select institutional investors.

Sector focus: Driven by three high-value deals of over USD 500 million each with eight other deals, energy and natural resources sector topped the value chart in Q1 2020. The sector also saw the biggest debt resolution deal by an international stressed asset funds in India and one of the biggest outside the insolvency resolution framework, without any change in management, by Goldman Sachs and Varde Partners consortium in Rattan India Power Ltd. Bail out of Yes Bank by the State Bank of India (SBI) and Adani Ports’ single-biggest acquisition of 75% stake in Krishnapatnam Port Company Ltd. led the banking and financial services sector and the transport and logistics sector to the forefront in terms of value. Each of the deals were valued at about USD 1.4 billion. Start-up, IT and e-commerce sectors were the volume haulers contributing 64% of the total deal volumes for the quarter. These sectors also saw high-value deals worth USD 4.6 billion. Other sectors that remained active during the quarter were pharma, manufacturing, retail, education and automotive, among others.

Outlook: The prevailing crisis has resulted in slowdown of global economies and given rise to the fear of recession. Consistent measures by the government could curtail the negative impact of slowdown and bring back deal-making, however, the slowdown might take longer than expected to dissipate. 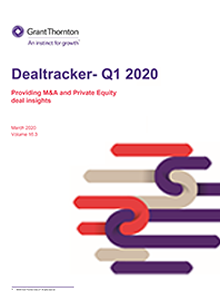