The Finance Minister, in Union Budget 2020, had proposed introduction of a new direct tax amnesty scheme (Scheme). Consequently, The Direct Tax Vivad se Vishwas Bill, 2020 has now been tabled in the Parliament.

The Scheme provides amnesty for all direct tax disputes (subject to certain exceptions) pending as on 31 January 2020, before various appellate forums i.e., Supreme Court, High Court, Income Tax Appellate Tribunal and Commissioner (Appeals). Further, the Scheme also lists out certain categories of people who will not be eligible to avail the benefit of the Scheme.

Salient features of the Scheme are:

This Scheme is in line with the government’s stated objective to cut down litigation and build trust and confidence among taxpayers. The success of the Scheme will garner revenues for the government and also benefit taxpayers who could then deploy the time and resources saved by opting for such dispute resolution, towards their business activities. 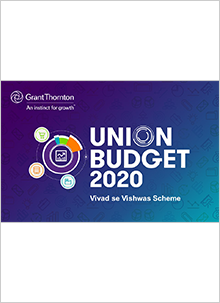