We are pleased to present the Monthly Dealtracker that captures the recent deal activities in India.

Despite all the global and domestic upheaval, growth trend in deals, which started last month, continued in February 2020. The month witnessed 112 deals aggregating to USD 5.8 billion, which is an 11% increase in deal volumes and 2.4x the deal values as compared to February 2019.

The deal activity in PE/VC transactions for the month translated into 32% and 23% growth in volumes and values, respectively, as compared to the previous year. Though the monthly trend reflected growth when compared to the same time previous year, deal values shrunk by around 33%, primarily due to the absence of transactions with ticket value exceeding USD 500 million. The larger transaction sizes reflect the increasing trend from PEs towards acquiring significant minority stakes or controlling stakes in investee companies.

Outlook: Based on the current trend, one would assume an exciting deal landscape for months to come. However, a cautious approach in the near-term would be advisable considering the meltdown in the global markets. 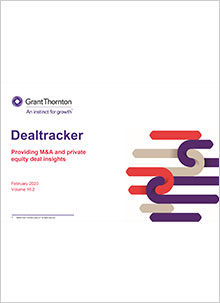