2020 has witnessed one of the biggest economic shocks the world has experienced in decades with the COVID 19 pandemic. The pandemic spread at an alarming speed, infecting millions and bringing economic activity to a near standstill as countries imposed tight restrictions on movement to halt the spread of the virus. This triggered an urgent need for action to cushion the pandemic’s health and economic consequences and set the stage for lasting recovery. The recent policies are an effort to rebuild the economy in both the short and long term. These involve strengthening health services and putting in place targeted stimulus measures to reignite growth. The path to recovery is also observed in India as it recorded 919 deals valued at USD 58.9 billion in YTD 2020 a remarkable 23% hike in deal values compared with YTD 2019.

The pace of economic activity normalisation has been picking up through the third quarter (Q3 FY20), and 320 deals worth USD 22.6 billion were reported, which is 41% and 28% higher in the values over the same period in 2019 and 2018, respectively. The majority of the USD 1 billion+ transactions were primarily a combination of investments raised as part of a deleveraging strategy on the back of strong technology platforms and consumer brands, fundraising to support recovery from the COVID 19 crisis and acquisitions to bail out debt stressed companies. The biggies like Reliance, Jindal, Flipkart, Future Group, among others, were frontrunners in executing the big cheque deals.

There was a steep spike in the mergers and acqusitions (M & A) deal activity in Q3 2020 with total values spiraling by over 1.4 times compared with Q3 2019 despite a 7% drop in the deal values. The growth in deal values was driven by a 3x increase in the cross border deal values led by Google’s USD 4.4 billion investment in Jio Platforms, followed by Haldia Petrochemicals’ USD 1.5 billion outbound acquisition of Lummus technology.

Further, the drive to accelerate India’s progress towards self-reliance in the raw materials, leadership in technology space and to add to its expanding retail business, powered by e commerce, have also boosted the deal activity during the quarter. The overall construct of deals is going through a change and the focus is shifting towards deleveraging through equity dilution and big ticket investments in strong brands with high execution capabilities. However, a significant portion of consolidations driven by stressed situation in the past year has witnessed a drop.

Contrary to the M&A deal activity, private equity (PE) investments recorded 226 investments worth USD 8.5 billion. While the investment volumes saw a 5% and 4% increase compared with Q2 2020 and Q3 2019, respectively. The values recorded a fall of 31% and 15%, respectively, in the same period. Barring the USD 9.5 billion raised by Jio platforms in the Q2, Q3 2020 recorded a 3x increase in the investment values, a sign of recovery after the halted deal activity witnessed on account of a nationwide lockdown imposed due to the pandemic. Majority of the investments during the quarter are driven by strong investor confidence in companies that performed well during the pandemic and are expected to cause disruptions in the market due to their technological advancements.

Sector focus: Led by Reliance Retail, the retail and consumer sectors clocked USD 5.3 billion in the deal values pie during the July September quarter, followed by the telecom sector led with a USD 4.8 billion investment in Jio . The two sectors captured 45% of the total deal values. In addition, energy, e commerce and manufacturing sectors logged billion dollar deals, together contributing to 25% of total deal values during the quarter. The start-up sector, on the other hand, continued to attract both strategic and financial investors, representing over 55% of total deal volumes at USD 1.6 billion. IT companies came in second with 23 deals. E-commerce and pharma companies also remained active, contributing 10% to the deal volumes. After witnessing a muted activity on account of the COVID 19 crisis, which halted the operations of several industries in the previous quarter, the automotive, media and entertainment, infrastructure, real estate, aerospace and defence sector witnessed some activity during the quarter an indication that the activity is likely to pick up in the coming quarters.

Outlook: As the Indian as well as global markets begin to open, there is a noticeable improvement in investor confidence, which is also likely to boost the deal activity in the coming months. On the flip side, several businesses are still facing challenges related to cash flows, stiff competition, among others, on account of an economic slowdown and depressed capital markets. The uncertainty around Brexit, China in the geopolitical spotlight and its policy aim for decoupling, US China trade wars and the upcoming US elections may cause hindrances in the deal market. However, the constant push and tireless efforts by the government and regulatory bodies to stand strong amid all these uncertainties will further improve investor confidence. 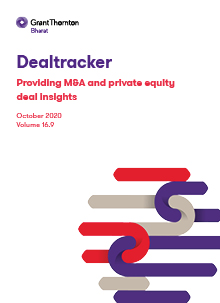