We are pleased to present the 15th annual Dealtracker, which captures the deal activities in India during 2019. 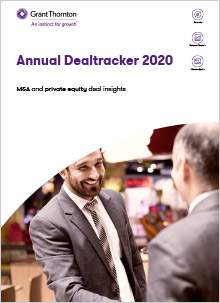 The year 2019 witnessed a series of worldwide economic uncertainties including the trade war escalation, prolonged Eurozone slowdown, no-deal Brexit and the risk of global recession. Amid these global tensions, India recorded just over USD 61 billion in deal values across around 1,200 transactions, which is a 44% drop in the values and more or less the same volumes as compared to 2018. The GDP also continued its

downward trend for the seventh consecutive quarter, falling to 4.5% in Q3 2019 after economic growth plunged to a six-year low at 5% for Q2 2019. Growth in India has taken a hit due to several factors, dampening the overall deal activity during 2019.

While domestic factors like growth slowdown, tight liquidity, market sentiment and currency depreciation added to the prevailing uncertainty, the M&A deal activity recorded a significant decline. The year recorded less than one-third of deal values at USD 27 billion compared to 2018, which recorded USD 90 billion on the back of 16 deals valued over USD 1 billion compared to only four this year.

While PE transactions had a subdued start in Q1 2019, PE investment values surpassed the 2018 figures, where deal value grew over 63% y-o-y at USD 33.6 billion across around 800 investments. This steep increase was driven by five deals in the billion-dollar club and 67 large deals of USD 100 million and above. This also led to another record year for increased growth-stage funding in more mature Indian companies. The primary reason for this was that besides the low sentiment as far as the Indian economy is concerned, PEs looking for divergence continue to be attracted to India’s moderately long-term growth potential.

Sector focus: To capitalise on synergies and improve efficiency, widen the market reach, leverage balance sheet and pare debt, core sectors like manufacturing, energy, infra, banking, telecom and pharma remained dynamic, contributing to over 58% of total deal values. On the other hand, the tech segment remained the key to attracting substantial deal activity, with growing start-up, IT and e-commerce sectors witnessing maximum transactions during 2019 and adding to 62% of total deal volumes. These sectors attracted significant investor attention with their promising and unmatched scope for development with constant technological evolution. Further, pushed by strategy to support organic and inorganic initiatives for focus markets, divest non-core assets and enter new markets, the year also witnessed considerable volume of activity in the pharma, banking and retail sectors

Outlook: The government has implemented a slew of reforms in recent months to boost credit in the market: Slashing of the lending rate by the Reserve Bank of India five times this year, withdrawal of ‘super-rich surcharge’ imposed on foreign investors, exemption of start-ups from ‘angel tax’, an infusion of INR 70,000 crore in public sector banks and a significant cut in the corporate tax rate. These encouraging reforms are expected to start bearing fruit in the coming year and therefore lead to a slow and steady revival in terms of growth trajectory.

Further, the government’s constant push for reforms seems to have brought the sentiments back on track, which is immediately visible from the stock market rally in the latter part of 2019 and early 2020. Specific results are expected to be demonstrated as the reforms gain momentum. India’s improvement in the ease of doing business ranking is expected to push foreign investment into India. Nevertheless, we still seem to be weak on two core elements: enforcing contracts and registering property. Measures around these two, especially around enforcing contracts, will boost not just foreign investment but also domestic M&A where funding domestic transactions is still a stress on the acquirer’s balance sheet. 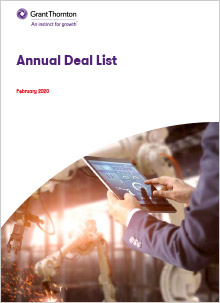