Amendments proposed to the Constitution of India

The Union government introduced the Constitution (122nd) Amendment Bill, 2014 in the Lok Sabha on 19 December 2014, paving the way for the introduction of the Goods and Services Tax (GST) regime in India.

Through this Bill, the government aims to incorporate necessary changes in the Constitution for the roll out of GST across India, which would usher in unanimity in indirect taxes amongst various sectors of the economy. Once approved by Parliament, the legislation on GST will give powers to both the Union and States, including Union territories, for appropriating levy and collection mechanism in the subject matter of goods and services. Furthermore, this common tax on goods and services shall subsume in its repertoire many indirect taxes being levied individually by the Centre and States, thereby removing their cascading effect. This will also provide a national market to enable uniform trade throughout the territory of India.

New Articles proposed to be inserted in the Constitution of India

Amendment of existing articles of the Constitution of India

The following articles of the Indian Constitution are proposed to be amended to give the effects mentioned below:

The introduction of the GST Bill in Parliament by the Union government is a welcome move. This is a stepping stone towards the rollout of a major tax reform, which is needed to invigorate the economy. After overcoming several major road-blocks in the past, there finally seems to be a consensus on ways to meet the concerns of the States on important matters, including compensation for any loss of revenue, autonomy, compensation structure, inclusion of entry tax and taxation of petroleum products. The need of the hour is a prompt approval of the Bill by Parliament within the ongoing winter session itself; if the Government wants GST to become a reality by April 2016, a highly optimistic deadline that it has set for itself. 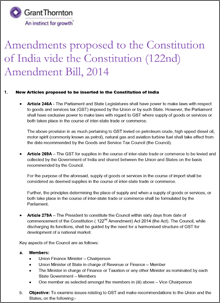