In February, in its first full-year Budget, India’s government announced a number of pragmatic measures designed to continue to bolster the economy, attract foreign investors by dispelling uncertainty around tax laws and make it easier for businesses to trade.

Rolling out the red carpet

In moves akin to rolling out the red carpet for foreign investors, the General Anti-Avoidance Rules were postponed for two years and foreign funds were excluded from the scope of minimum alternate tax on their capital gains income. The government also reduced the corporate tax rate to 25% (on a par with China) over four years, and reiterated its commitment to introduce the Goods and Services Tax regime in 2016.

These measures came close on the heels of India’s parliament ratifying the 49% cap for foreign direct investment (FDI) in insurance, an increase from 26%. Since storming to power in May 2014, the government has already liberalised FDI investment in railways, defence and medical devices. To further simplify the FDI regime, the government plans to do away with the distinction between different types of foreign investments, for example foreign institutional investor (FII) and FDI. This is intended to give greater flexibility to Indian companies to raise foreign capital, while removing ambiguity around sectoral foreign investment caps.

In an effort to make it easier to do business, the government recently reduced the number of mandatory documents required to import and export goods – from ten to three in each case. This follows the Ministry of Corporate Affairs’ move to ease compliance requirements for corporates by amending a number of rules related to e-voting, board powers and debenture issues.

There is no doubt that the government’s pro-reform measures in the last few months have bolstered economic sentiment. Projections for India’s GDP for the current fiscal year have improved dramatically, with ratings agency Fitch forecasting India’s GDP to grow by 8% in 2015-16, and 8.3% the following year. This is up from its previous forecasts of 6.5% and 6.8%, respectively.

These GDP projections complement the recent findings of the Grant Thornton International Business Report (IBR), which reveals that, globally, Indian businesses are the most optimistic about the economy for 2015, with 98% saying they are pleased with the policies of the government. This compares to a global average of 35%.

According to the IBR findings, optimism among Indian businesses has continued to improve throughout 2014, from 89% in Q1 to 95% in Q4. However, 70% of Indian businesses cite regulations and red tape as a constraint on growth – the highest around the world. It shows that India Inc expects the government to ease regulatory shackles and enable faster decision-making.

Despite the optimistic outlook, the economic recovery is still experiencing a few jolts. The pace of industrial production growth slipped to a three-month low in January, with the index of industrial production only rising by 2.6%, as against 3.2% in December. After seeing inflationary pressures ease over the last few months, the Reserve Bank of India has cut the key policy rate by 0.5% since the start of 2015. However, in February retail inflation inched up to a four-month high of 5.37%, which may put a stop on any further interest rate cuts.

The automotive sector also showed mixed signs of recovery. Domestic car sales jumped by 7% in February while commercial vehicle sales grew by 10%. However, the industry remained cautious with a 9% drop in rural motorcycle sales in February, while the overall two-wheeler market witnessed a 1% decline in sales.

India’s stock markets have remained turbulent since the start of this year. As of 31 March, the Sensex benchmark has gained only 4.5% so far in 2015, after rising almost 30% last year. Although the markets welcomed the announcements made in the Union Budget, Sensex fell by 700 points on the Bombay Stock Exchange on Budget day, although it finally closed 141.38 points up. This was the first rise on a Budget day in four years.

Overseas investors, however, continue to bet big on India’s long-term economic prospects, with FIIs having pumped in US$43.5 billion net over 2014-15, as of 31 March. Of this, US$26.3 billion has been invested in debt. According to data from Bloomberg, Indian debt has been the third-highest recipient of foreign fund inflows in the current financial year after Japan and South Korea in the Asia-Pacific region, excluding China. FDI more than doubled to US$4.48 billion in January, the highest inflow over the past 29 months.

With the government ready to run the extra mile on key reforms including land acquisition and infrastructure, the economy is poised for growth in the coming months. However, while India Inc has welcomed the measures announced in the Budget, it still wants to see more, fast-paced action on the ground to make it easier to do business and alleviate regulatory bottlenecks. 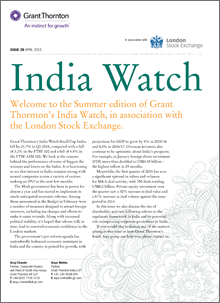