An overview & detailed analysis of the Union Budget 2017-18

“The people of India have voted decisively for a change,” said Arun Jaitley, Hon. Finance Minister, Government of India in his opening remarks while presenting the Union Budget 2017-18 in  Parliament on Tuesday, 1 February 2017.

With key state elections around the corner, there was considerable speculation around what to expect. What was unveiled on Budget hour was a focus on “Transform”, “Energise” and “Clean” amidst two tectonic changes, demonetisation and GST. The Budget reinforced government’s intent to focus on the farmer and the poor, put in place a policy and system based governance, address inflation and price rise and above all, energise the youth. The provisions of the Finance Bill 2017 addresses the 10 themes that formed the backbone of the proposals and set in motion a roadmap towards a cashless economy and measures to check corruption.

We welcome the Union Budget for its attempt to provide direction to these initiatives.

For further understanding, we are delighted to present 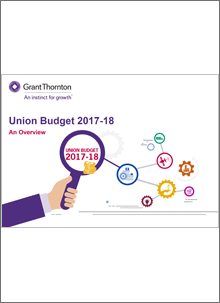 We hope you find these reports useful and welcome your feedback. 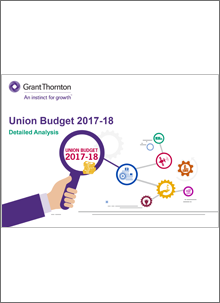