Experts said not many companies were likely to switch to the International Financial Reporting Standards (IFRS) even as the government readied a notification on new accounting rules to be followed by companies from the next financial year. This is because less than three months are left for the new financial year to begin and companies need time to shift to the new system.

“It seems quite unlikely that many companies will be able to take the benefit of the voluntary early adoption that is permitted for the financial year beginning April 1, 2015, for which the transition date is April 1, 2014, for comparative purposes,” said Sai Venkateshwaran, partner and head of accounting advisory services at KPMG India.

“The transition will be extremely challenging as sophisticated judgement will be required in drawing up financial statements,” said Ashish Gupta, partner at Walker Chandiok & Co. 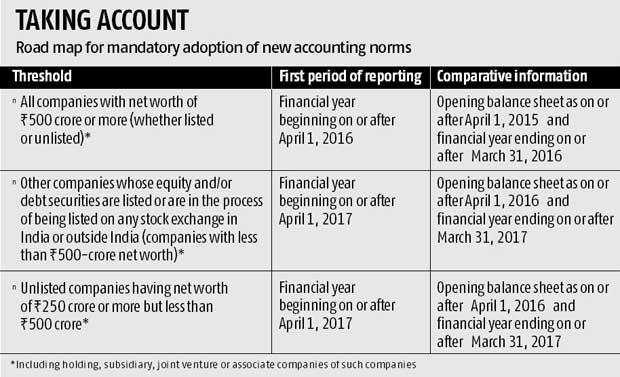 The standards may apply to standalone as well as consolidated accounts. “This will reduce the burden of maintaining two separate systems of accounting,” said Sumit Seth, partner at Price Waterhouse & Co.

Finance Minister Arun Jaitley had in the budget proposed adoption of these norms voluntarily from 2015-16 and mandatorily from 2016-17. “Going by the budget announcement, it is expected the government will also notify tax accounting standards in time for this transition to address the tax implications,” said Venkateshwaran.