In a move that brings a big relief for corporations doing cross-border transactions, the government has notified the rules governing the rollback provisions in advance pricing agreements (APA). Though these provisions were announced in Finance Minister Arun Jaitley’s maiden Budget in July 2014, these could not be operationalised because the rules were not codified.

Rollback provisions refer to the facility of rolling back an advance price ruling on arm’s length price (ALP) or a method to calculate ALP for transactions done years prior to those covered by an APA. APA is a mechanism through which a taxpayer can seek and obtain the tax department’s view on what the ALP or ALP method for a particular transaction would be.

Accordingly, companies can now seek and obtain rollback of rulings for up to four prior years. As of now, transfer pricing assessments have been completed up to financial year ending March 2011. The new provisions will allow taxpayers to now get advance rulings rolled back for 2011-12, 2012-13, 2013-14 and 2014-15. Earlier, this was not possible as by virtue of being an ‘advance’ ruling it could be applicable only to prospective transactions.

Consultants said the notification is a big relief for India Inc. However, some conditions, such as rollback provisions should not lower income or raise losses, could discourage companies from using these APAs. 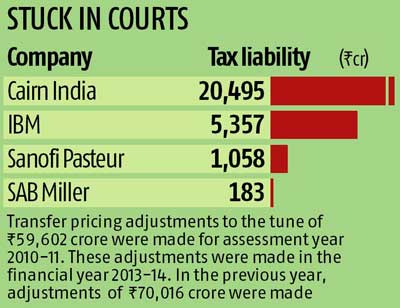 Gandhi added the move would help reduce significantly the number of cases that would go to the dispute resolution panel and subsequent litigation over the next few years. The APA schemes of many foreign countries provide for ‘rollback’ mechanism for dealing with ALP issues relating to transactions entered into during the period prior to APA.

Gandhi said one could opt for rollback provisions only with respect to the same international transactions covered in the forward-looking agreement. “Taxpayers who have already filed an APA application or have already entered into an agreement prior to January 1, 2015, need to ensure that they file the rollback application in the proposed Form 3CEDA by 31 March, 2015.”

Vaishali Mane, executive director, Walker Chandiok & Co, said though there would be relief in the form of tax certainty, conditions such as rollback provisions should not bring down the total income or increase the loss in that particular year could prove a dampener. “Technology firms can hope that they could get a ruling for cost plus 18 per cent or 20 per cent in place of cost plus 24 per cent some TPOs [transfer pricing officers] draw. But it may not go down to cost plus 16 per cent due to these conditions.”

She added the additional fee of Rs 5 lakh was also found to be “burdensome” by some clients.

Rollback would follow the main APAs in key aspects. For example, if the forward-looking agreement is bilateral, the rollback would also be bilateral. Similarly, where the forward-looking APA is unilateral, the rollback years would also be unilateral. Unilateral APAs involve only a tax assessee and the Indian government, while bilateral APAs also involve the government of the country where the parent company is located.

Now with experience of three years of APA filing, the pre-filing consultation that was earlier mandatory has been made optional for the taxpayer, consultants said.

The APA scheme was introduced in 2012. It had received an enthusiastic response, with about 340 applications filed in the first two years of its introduction. In fact, the first batch of five applications was concluded in March 2014 within a year against the international benchmark of one and a half year.

India had signed a bilateral advance pricing agreement with Japan’s Mitsui for five years in 2014.