However, as at that date, the net worth of these companies has been reported to have improved by 1.7 per cent, which reflects the net result of certain accounting policy choices made by these companies upon transition to IndAS.

Commenting on the study, Siddharth Talwar, Partner, Grant Thornton India LLP said, "Though different sectors of the economy have reported varied impact due to transition to IndAS, it is important to read the message underlying these reported numbers. What is important to note is the accounting policy choices made by the companies, the reasons behind these choices and important judgment and estimates applied by their management." 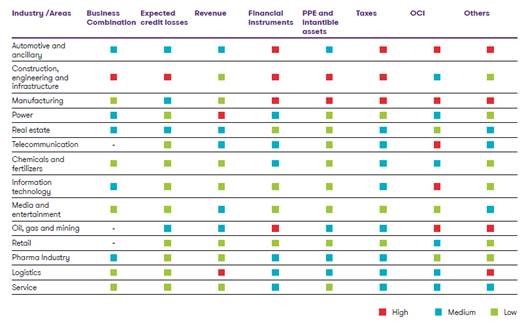 The construction, engineering and infrastructure sector has been hit the worst with a negative 117.5 per cent impact on its profitability due to IndAS transition. Further, profitability of the manufacturing sector, which constitutes more than 40 per cent of 500-plus companies covered by the Grant Thornton study, has been adversely affected by 42 per cent. On the flip side, logistics, telecom and real estate witnessed a positive impact on their profitability due to transition to IndAS.

"If one goes down deeper into these numbers, there are few common threads across most of the sectors – the areas of financial instruments, property, plant & equipment and revenue recognition have had a considerable impact on profitability and net worth of all sectors, warranting several decision-making points by financial statement prepared to reflect the true commercial substance and business rationale" he adds.

While fair valuation of financial instruments and property, plant and equipment (PPE) and intangible assets has increased the net worth substantially, the recognition of revenue from contracts with customers as per IndAS had a negative impact thereon. The adjustments in area of financial instruments have positively impacted the net worth by 1.8 per cent whereas for PPE and intangible assets, the adjustments upon IndAS transition boosted the net worth for these companies by 4.1 per cent.

These results of the detailed study by Grant Thornton are in line with the findings of a survey conducted by it in early-2015, the time when IndAS was slated to become mandatory. The respondents at that time also had anticipated that fair valuation related accounting impact is likely to consume substantial time of financial reporting teams.