India Inc. expects the Union Budget 2016-17 to bring reforms towards a simplified tax re..... 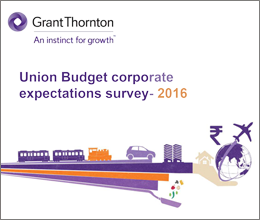 Indian businesses are hopeful that Finance Minister Arun Jaitley will introduce tax reforms in the upcoming Union Budget to create a more simplified and litigation free tax regime to improve ease of doing business in India. Grant Thornton’s Pre-Budget Corporate Expectations Survey – 2016 says that the upcoming Budget will bring tax reforms for minimisation of litigation in the country. Almost 88 percent of the respondents hope the Budget to bring such reforms.  The survey aims to gauge the expectations of dynamic businesses and capture their hopes and aspirations with respect to regulations, key government policies and taxation from the upcoming budget.

“While some big ticket reforms such as Goods and Service Tax (GST) may be mired in politics, one hopes that the government remains firm on its commitment to make India an attractive investment destination by targeted incentives. Some of these incentives include reduced tax rates and tax rationalisation. These and other measures will usher in transparency and accountability in tax administration,” said Riaz Thingna, Director, Grant Thornton Advisory Private Limited.

In line with the overall expectations on the role of Startup India, Standup India and Make in India campaigns in the Budget, an overwhelming 96 percent surveyed population expects introduction of tax holidays for startups in India and 88 percent of the respondents expect tax incentives would be doled out in support of Make in India campaign. Corresponding to the same, the survey shows that Corporate India expects a maximum thrust on the startup segment and manufacturing sector, followed by infrastructure and defence sectors.

As far as the expectations from the changes in tax rates are concerned, 59 percent respondents expect that the government would announce a reduction in corporate tax rates. More than half of the respondents (55 percent) expect a rate cut for personal taxation as well. On the indirect tax front, while 56 percent respondents expect that Goods & Service tax (GST) will be passed in the upcoming Budget session, in the interim, 61 percent survey participants believe that existing mechanism of allowing input credit would be further liberalised and 45 percent of the respondents expect that existing exemptions would be pruned. However, the expectation on increase in service tax and excise duty is divided with 46 percent opposing it.

On expected corporate tax amendments, 65 percent of the surveyed population expects a minimum threshold should be provided for applicability of ICDS provisions. While, almost half of the respondents (48 percent) expects the ICDS implementation to be deferred by a year and 40 percent respondents demand it to be made applicable to the companies doing accounting under Ind-AS.  On the indirect tax front, a high range (61-64 percent) of the survey respondents anticipate clarity on double taxation of licensed IP rights and that a time limit would be prescribed for adjudication of show cause notice. However, a lower range (39 – 42 percent) of respondents expect amendments to allow reversal of service tax in case of bad debt and exclusion of penalty amount from mandatory pre-deposit for filing appeal.